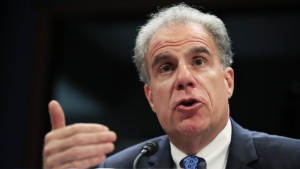 FILE - In this June 19, 2018, file photo, Department of Justice Inspector General Michael Horowitz testifies before a joint House Committee on the Judiciary and House Committee on Oversight and Government Reform hearing on Capitol Hill in Washington. A Justice Department inspector general report being released Monday is expected to say that the FBI had a legitimate basis to open its investigation into ties between the Trump campaign and Russia and that senior law enforcement officials weren’t motivated by partisan bias. (AP Photo/Manuel Balce Ceneta, File)

WASHINGTON - The Justice Department's internal watchdog will release a highly anticipated report Monday that is expected to reject President Donald Trump's claims that the Russia investigation was illegitimate and tainted by political bias from FBI leaders. But it is also expected to document errors during the investigation that may animate Trump supporters.

The report, as described by people familiar with its findings, is expected to conclude there was an adequate basis for opening one of the most politically sensitive investigations in FBI history and one that Trump has denounced as a witch hunt. It began in secret during Trump's 2016 presidential run and was ultimately taken over by special counsel Robert Mueller.

The report comes as Trump faces an impeachment inquiry in Congress centred on his efforts to press Ukraine to investigate a political rival, Democrat Joe Biden. Trump also claims the impeachment investigation is politically biased.

The release of Inspector General Michael Horowitz's review is unlikely to quell the partisan battles that have surrounded the Russia investigation. It's also not the last word on that investigation. A separate internal investigation continues, overseen by Trump's attorney general, William Barr and led a U.S. attorney, John Durham.

Trump told reporters Saturday that he was waiting for the chance to see Horowitz's report and that he looked forward “very much to seeing what happens with the Durham report, maybe even more importantly, because it's a horrible thing that took place and it should never happen to another president.”

Horowitz's report is expected to identify errors and misjudgments by some law enforcement officials, including by an FBI lawyer suspected of altering a document related to the surveillance of a former Trump campaign aide. Those findings probably will fuel arguments by Trump and his supporters that the investigation was flawed from the start.

But the report will not endorse some of the president's theories on the investigation, including that it was a baseless “witch hunt” or that he was targeted by an Obama administration Justice Department desperate to see Republican Trump lose to Democrat Hillary Clinton in 2016.

It also is not expected to undo Mueller's findings or call into question his conclusion that Russia interfered in that election in order to benefit the Trump campaign and that Russians had repeated contacts with Trump associates.

Some of the findings were described to The Associated Press on condition of anonymity by people who were not authorized to discuss a draft of the report before its release. The AP has not viewed a copy of the document.

Trump said last week that he expected Horowitz's report to be “devastating,” but said the “big report” would come from John Durham, the U.S. attorney appointed by Barr to examine how intelligence was gathered in the early days of the Russia investigation. Durham's investigation is criminal in nature, and Republicans may look to it to uncover wrongdoing that the inspector general wasn't examining.

It is unclear how Barr, a strong defender of Trump, will respond to Horowitz's findings. He has told Congress that he believed “spying” on the Trump campaign did occur and has raised public questions about whether the counterintelligence investigation was done correctly.

The FBI opened its investigation in July 2016 after receiving information from an Australian diplomat that a former Trump campaign adviser, George Papadopoulos, had been told before it was publicly known that Russia had dirt on the Clinton campaign in the form of thousands of stolen emails.

By that point, the Democratic National Committee had been hacked, an act that a private security firm - and ultimately U.S. intelligence agencies - attributed to Russia. Prosecutors allege that Papadopoulos learned about the stolen emails during a conversation in London with a Maltese professor named Joseph Mifsud. Papadopoulous pleaded guilty to lying to the FBI about that interaction.

The investigation was taken over in May 2017 by Mueller, who charged six Trump associates with various crimes as well as 25 Russians accused of interfering in the election either through hacking or a social media disinformation campaign. Mueller did not find sufficient evidence to charge a criminal conspiracy between the Trump campaign and Russia.

He examined multiple episodes in which Trump sought to seize control of the investigation, including by firing James Comey as FBI director, but declined to decide on whether Trump had illegally obstructed justice.

The inspector general's investigation began in early 2018. It focuses in part on the FBI's surveillance of a former Trump campaign adviser, Carter Page. The FBI applied in the fall of 2016 for a warrant from the secretive Foreign Intelligence Surveillance Court to monitor Page's communications, with officials expressing concern that he may have been targeted for recruitment by the Russian government.

Page was never charged and has denied any wrongdoing.

The warrant was renewed several times, including during the Trump administration. Republicans have attacked the procedures because the application relied in part on information gathered by an ex-British intelligence operative, Christopher Steele, whose opposition research into the Trump campaign's connections to Russia was funded by Democrats and the Clinton campaign.

In pursuing the warrant, the Justice Department referred to Steele as “reliable” from previous dealings with him. Though officials told the court that they suspected the research was aimed at discrediting the Trump campaign, they did not reveal that the work had been paid for by Democrats, according to documents released last year.

Steele's research was compiled into a dossier that was provided to the FBI after it had opened its investigation.

The report also examined the interactions that senior Justice Department lawyer Bruce Ohr had with Steele, whom he had met years earlier through a shared professional interest in countering Russian organized crime. Ohr passed along to the FBI information that he had received from Steele but did not alert his Justice Department bosses to those conversations.

Ohr has since been a regular target of Trump's ire, in part because his wife worked as a contractor for Fusion GPS, the political research firm that hired Steele for the investigation.

This is the latest in a series of reports that Horowitz, a former federal prosecutor and an Obama appointee to the watchdog role, has released on FBI actions in politically charged investigations.

Last year, he criticized Comey for a news conference announcing the conclusion of the Clinton email investigation, and for then alerting Congress months later that it had been effectively reopened. In that report, too, Horowitz did not find that Comey's actions had been guided by partisan bias.

The inspector general also referred former FBI Deputy Director Andrew McCabe for potential criminal prosecution after concluding that McCabe had misled his office about his involvement in a news media disclosure. No charges have been brought and McCabe has adamantly denied any wrongdoing.