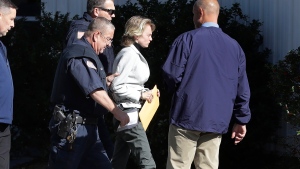 Michelle Carter, center right, is escorted to a parole hearing on Thursday, Sept. 19, 2019, in Natick, Mass. Carter, who was sentenced to 15 months in jail for urging her suicidal boyfriend via text messages to take his own life, is asking for early release. (AP Photo/Steven Senne)

BOSTON - The Massachusetts woman convicted of urging her boyfriend to kill himself via text messages has been denied early release.

The state Parole Board announced Friday it rejected Michelle Carter's bid for release after serving about half her 15-month jail sentence. Carter appeared before the board Thursday.

Board members Sheila Dupre and Tonomey Coleman said in their brief decision that Carter “needs to further address” the factors that led to her actions. They didn't elaborate.

They also wrote that they “remain troubled” that Carter not only encouraged Conrad Roy III to kill himself in 2014, but also actively prevented others from intervening. And they said her statements and actions before and after Roy's death appeared “irrational and lacked sincerity.”

“Given subject's behaviour in facilitating victim's death, release is not compatible with best interest of society,” the memo reads in part.

Eric Goldman, a lawyer for Roy's family, says the board's decision was “well-reasoned and correct.”

But Carter's attorney, Joseph Cataldo, said the board's decision appears to be based on the state Supreme Judicial court's prior decision upholding his client's conviction, which he argues was an “incorrect and dangerous” ruling.

Carter's lawyers maintain her texts were constitutionally protected free speech, and they've appealed her conviction to the U.S. Supreme Court, which hasn't decided whether it will take up the case yet.

“It is never in society's best interest to incarcerate anyone for the content of their speech, especially if there's no statute criminalizing such speech,” Cataldo said.

Carter was convicted in 2017 of involuntary manslaughter in the 2014 death of Roy, 18. She began serving her sentence in February in the Bristol County House of Corrections in Dartmouth.

The judge at the time determined that the then-17-year-old Carter caused Roy's death when she ordered him in a phone call to get back in his carbon monoxide-filled truck that he'd parked in a Kmart parking lot.

The phone call wasn't recorded, but the judge relied on a text Carter sent her friend in which she said she told Roy to get back in.