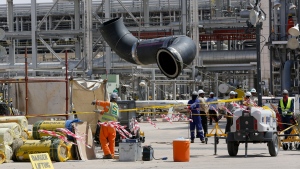 In this photo opportunity during a trip organized by Saudi information ministry, workers replace a damaged tube in the Aramco's Khurais oil field, Saudi Arabia, Friday, Sept. 20, 2019 after it was hit during Sept. 14 attack. Saudi officials brought journalists Friday to see the damage done in an attack the U.S. alleges Iran carried out. Iran denies that. Yemen's Houthi rebels claimed the assault. (AP Photo/Amr Nabil)

CAIRO - Yemen's Houthi rebels said late Friday night that they were halting drone and missile attacks against Saudi Arabia, one week after they claimed responsibility for a strike that crippled a key oil facility in the kingdom.

The U.S. and the Saudis blamed the Sept. 14 attack on Iran, which backs the Houthi rebels fighting a Saudi-led military coalition in Yemen. Iran denies any responsibility.

Mahdi al-Mashat, head of the Houthis' supreme political council, which runs rebel-held areas in Yemen, said the group is waiting for a “positive response” from Saudi Arabia. His comments were carried by the Houthi-run al-Masirah satellite TV.

The announcement could be a first step toward a wider ceasefire in Yemen, but it remained unclear, and there was no immediate response from the Saudi-led coalition.

The conflict has killed tens of thousands of people and sparked what the U.N. describes as the world's worst humanitarian crisis.

The recent attacks on Saudi Arabia knocked out more than half of the country's daily crude oil production.