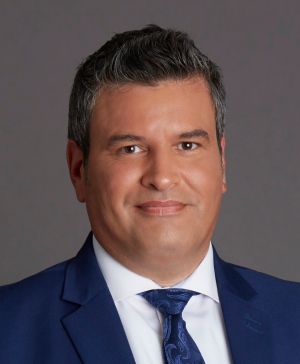 CP24 BREAKFAST co-host and CP24 LIVE AT NOON host George Lagogianes has been with CP24 since 2007 and has more than 30 years of broadcasting experience.

Reporting on everything from the Oscar® red carpet to the frozen tundra of the Arctic, his passion for telling impactful life stories has taken him all over the globe.

In Toronto, Lagogianes has covered many top stories for CP24 ranging from the Rob Ford scandal throughout 2013-2014, the G20 protests in Toronto during the summer 2010, and the Sunrise propane explosion in August 2008, as well as live election coverage for all three levels of the Canadian government. When he’s not covering breaking news, Lagogianes loves to talk to Torontonians about what’s going on right in their own backyard.

Lagogianes landed his first job as a personal assistant with CTV Sports at the Calgary Winter Olympics in 1988. From 1989 to 1995, George co-hosted ELECTRIC CIRCUS, reported for MUCHNEWS, and worked as a VJ for MuchMusic. This was followed by anchoring BRAVO NEWS, and hosting ARTS & MINDS and LIVE @ THE REHEARSAL HALL on Bravo.

In 1996, Lagogianes joined CityTV in Toronto as a cameraman and live-eye videographer. He worked briefly with CBC as a field producer and shooter. In 1997 Lagogianes returned to CtiyTV as an anchor and entertainment reporter, a position he held until 2005.

Originally from Owen Sound, Ont., Lagogianes is a graduate of Ryerson University with a Bachelor of Arts from the Radio Television Arts program.