It seems like everyone is trying to figure out what's wrong with the Toronto Maple Leafs these days.

You can count one of the Vatican's newest cardinals among them.

"It's a profound question and it is far beyond my ability to answer," Cardinal Thomas Collins told CP24s Stephen LeDrew during a wide-ranging interview Thursday afternoon. "I can pray, but I don't know. It's a matter to be worked out by people with more expertise than I have."

Collins became one of the more high-profile members of Leaf Nation in February when a photographer snapped a picture of him wearing a personalized Maple Leafs jersey in the Vatican complete with a cross beside his name.

Collins was in the Vatican for a ceremony elevating him and 21 others to the role of cardinal.

"I'm the Archbishop of Toronto and they are our team," Collins said in defence of the city's basement dwelling hockey team Friday. "Go Leafs go."

To see Collins' interview in its entirety follow the links to the right. 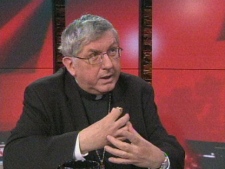