After overtaking the Liberals, the NDP continues to gain ground just days before Canadians cast their ballots, according to the latest Nanos Research daily tracking poll.

The poll, conducted exclusively for CP24, CTV and the Globe and Mail, finds the Conservatives in the lead with the support of 36.6 per cent of Canadians.

The Tories are followed by the surging NDP, who are at 30.4 per cent.

According to the opinion poll, the Liberals have dropped to third with 21.9 per cent of support, followed by the Bloc Quebecois at six per cent and the Green Party with 4.1 per cent.

Of the 1,012 people who were surveyed, 15 per cent remain undecided.

Where are the leaders?

Prime Minister Stephen Harper is kicking off his day with a couple of events in Niagara Falls. In the afternoon, he's holding events in Sainte-Foy, Que.

Harper isn't the only leader trying to drum up support in La Belle Province, which has become a battleground in this election campaign.

NDP leader Jack Layton is campaigning in Yellowknife before holding a late afternoon rally in Saskatoon. 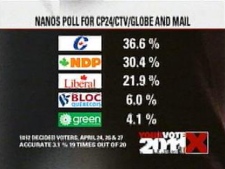 The Tories are holding onto the lead but the NDP continues to make gains, according to a Nanos Research daily tracking poll released Thursday, April 28, 2011.