NDP to pick next leader in March

OTTAWA - The New Democrats will have a new face without the familiar moustache in March.

The NDP leadership convention will be held March 24 in Toronto.

And for the price of a modest new car, you too can enter the race.

The federal council of the New Democrats have set an entry fee of $15,000 -- double the cost of last time -- for the contest to replace the late Jack Layton.

There were New Democrats hoping the entry fee would be much higher than the $7,500 it cost to run in the 2003 race that Layton won.

Their thinking was the steeper the fee, the more serious the candidates.

So far no one has officially declared a candidacy, but a quiet campaign is well underway.

The general consensus is that NDP president Brian Topp and deputy leader Thomas Mulcair are the front runners.

Topp is a longtime party insider and Layton confidant who was the NDP's national campaign director in the 2006 and 2008 federal elections. He was a key architect of this year's breakthrough that saw Canadians send 103 New Democrat MPs to Parliament.

Montreal born and raised, Topp is fluently bilingual. He was also Saskatchewan Premier Ray Romanow's deputy chief of staff in the 1990s.

Topp would not say if he planned to run.

"I won't be making any announcements about that imminently," he wrote in an email.

"Our executive and council did an excellent job balancing the issues," he wrote.

"I'm pleased by the campaign timing, which gives us time to build but doesn't focus us on ourselves for too long."

Mulcair is the party's Quebec lieutenant, and he can claim at least some credit for the NDP's electoral success in the province.

A former Quebec environment minister under Liberal premier Jean Charest, Mulcair jumped to the federal NDP in 2007. He won a byelection that year to become the party's lone Quebec MP.

"He will take the time to analyze these rules and will continue his process of consultation and reflection," said his spokeswoman, Chantale Turgeon.

But a new poll suggests most Canadians don't know the candidates.

Four in ten say they know nothing at all about her.

Chow says she isn't running. She will, however, cast a ballot.

Given her standing among New Democrats, Chow has the potential to shape the outcome of the leadership race. Some might consider her endorsement to be tantamount to a nod from Layton himself.

Undoubtedly aware of this, Chow isn't showing her hand.

"As a person that has been married with Jack Layton for so long and shared his life's passion, both spiritually and through his work, I don't think it's fair for me to comment on which leader is better than others."

The poll suggests most Canadians know nothing about the Top 2 would-be contenders.

Nearly two-thirds of Canadians -- 63 per cent -- say they know nothing at all about Mulcair. Only 12 per cent say they know a lot and 24 per cent know a little.

Almost three in four people polled, or 73 per cent, say they know nothing about Topp. Just two per cent claim to know a lot about him, while 23 per cent say they know a little.

The poll, conducted Sept. 1-4, is considered accurate to within plus or minus 3.1 percentage points, 19 times in 20.

Earlier Friday, the interim head of the NDP urged her party to stick together despite a leadership race that could unglue the disparate elements of the largely rookie caucus.

Nycole Turmel made the plea as the party's federal council gathered in an Ottawa hotel to set the ground rules for the race to replace Layton.

"Every step we take will be watched closely," Turmel said. "We must remain focused on the job of building our party.

All NDP members are eligible to vote starting Feb. 18. The convention will be held at the former exhibition grounds in Toronto. 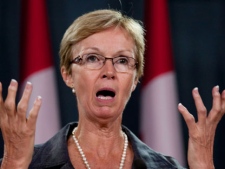