NEW YORK - Newly posted audio files depict the horror of 9-11 unfolding in the sky, as air traffic controllers struggled to follow the faint tracks of hijacked planes, fighter jets tried in vain to chase them down and a flight attendant made a desperate appeal for help.

The sound files add a layer of emotion to previously published transcripts, as puzzlement and frustration seeps into the voices of controllers, military commanders, and even pilots watching the attacks from the sky. There are shouting and ringing phones in the background -- the soundtrack, usually omitted from written transcripts, of America suddenly at war.

In one chilling excerpt, screaming and a shouted "Hey!" is heard over the radio as hijackers storm the cockpit of United Flight 93. That's followed by a strange, strained cry. Stunned controllers and other pilots discuss the sounds, trying to make sense of what they heard.

"No dry words on a page can capture that; you really have to hear it," said John Farmer, dean of the Rutgers University School of Law and former senior counsel to the government's 9-11 Commission.

The sound files were posted online Wednesday, just days before the 10th anniversary of the attacks, to accompany a monograph published by the Rutgers University Law Review. The release was first reported by The New York Times.

The monograph was written by Farmer and other investigators working for the 9-11 Commission but was not completed by the time the commission released its final report in 2004.

Farmer and another investigator, Miles Kara, decided to finish the document and add the audio after their draft and the original Federal Aviation Administration recordings were declassified last year.

Most of recordings come from the FAA and are of controllers and the military liaisons working with them. But some come from other sources, including a phone call that Betty Ong, a flight attendant on American Airlines Flight 11, placed to the airline.

"Somebody's stabbed in business class, and, um I think there is Mace that we can't breathe," Ong says. "I don't know, I think we're getting hijacked."

After Flight 11 hit the World Trade Center, tapes recorded the conversation among controllers as a second plane streaked past the window of a radar control facility on its way to Manhattan.

"Another one just hit the building," someone says.

Another person responds: "Oh my God."

It's followed by: "The whole building just, ah, came apart."

Someone utters again: "Oh my God."

Some original recordings from 9-11 still have not been made public, including military communications, discussions among White House officials, and the cockpit voice recorder from Flight 93.

Farmer listened to the cockpit voice recording during the 9-11 Commission investigation. He said it is a stirring record of the hijacking and of the passengers' attempt to retake control of the plane before it crashed near Shanksville, Pennsylvania.

Much of the audio released Wednesday has been previously documented in hearings, lawsuits and various government reports. Farmer himself included many of the transcripts in a 2009 book, "The Ground Truth."

But the actual voices of confused controllers and pilots underscores the chaos in the sky that morning, especially in the first minutes after the hijackers swung their airliners off course and turned off the aircrafts' transponders, making it difficult for radar to track them.

The military learned about the hijacking of Flight 11 nine minutes before it crashed into the World Trade Center, and was never notified about the other hijackings before those planes crashed.

"The confusion on that day is something that we sometimes forget about," said Andrew Gimigliano, editor-in-chief of the Rutgers Law Review. "The idea that hijacked planes would be used in that manner just was not something that people were thinking about, and this is really illustrative of what the real tenor was on that morning." 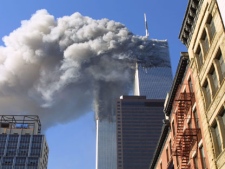 In this Sept. 11, 2001 file photo, the twin towers of the World Trade Center burn after hijacked planes crashed into them in New York. (AP Photo/Diane Bondareff, File)