Police in Halton Region lauded a 17-year-old aspiring teacher who found a bag containing up to $30,000 of cash and cheques from a dental office and handed it in to police without skipping a beat on Saturday evening.

Kylie McDonald told CTV News Toronto she was just leaving a nail salon in the Derry Road and James Snow Parkway area of Milton on Saturday at 5 p.m. when she came across a peculiar mesh bag.

“I went over to see it, not realizing I was going to open it and find that much money,” she said.

She said the bag contained a series of white envelopes; each with a name on it, including one that indicated to her it belonged to a dentist at nearby clinic. 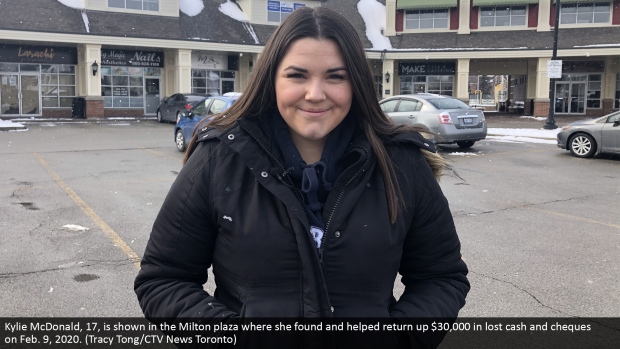 “The first thing I thought was whoever lost this probably freaking out. If this was me I wouldn’t know what to do,” McDonald said. “Were they going to lose their job because of how much money they just lost?”

So she called Halton Regional Police.

“I was even thinking a lot of people my age would never hand anything like that in. But I am that kind of person where even if I see 1000 or a couple hundred dollars I return it.”

Asked if she considered even for a moment whether to keep some or all of the cash, she says no.

“No. I was honestly so nervous.”

Reflecting on the discovery, McDonald said the moment she came across the cash seemed surreal.

“It reminded me of a movie scene.”

For their part, local police said the act restored their faith in “the majority” of youth.

“It is acts of honestly and civic duty (such as) this that replenish faith in the good-hearted nature of the majority of youth in our community,” they said Sunday. “Halton Regional Police acknowledges this young woman and commends her for her honesty and integrity.”

McDonald said her act proves young people can do the right thing just like anyone else.

A dentist at the clinic met with the teen on Sunday and rewarded her a cheque for $500. McDonald said she will use the money to buy a computer.