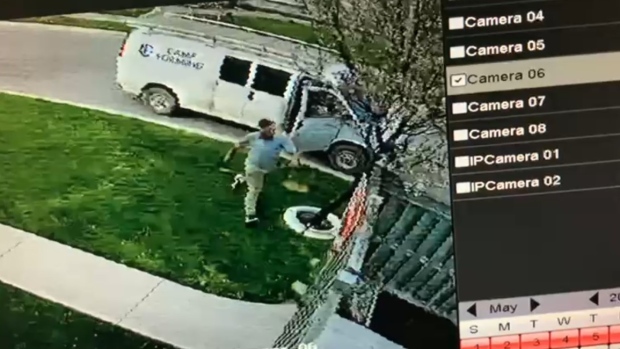 Two people have been charged after allegedly tearing down a Liberal candidate's election signs in Brampton.

The incidents occurred last week on a residential street in the Brampton West riding and were caught on camera.

Video provided to CTV News by the Ontario Liberal Party appears to show a man ripping an election sign from a lawn and walking away with half of it after it tore apart.

In another video, a man is seen exiting a white van before approaching a wooden fence, where a campaign sign is attached. He then can be seen removing the sign and taking it back to his van.

The damaged signs belonged to Rimmy Jhajj, running in the riding.

The van seen in the video has the logo and name of Camp Forming Inc., a foundation contractor based in Vaughan. After the videos surfaced, the company said they would investigate as they do not condone the behaviour.

Hours later, the company said they terminated the two employees allegedly involved in the incident and turned them over to the police.

They were released and are scheduled to appear in court at a later date.

After handing the two men to the police, Christina Campoli, the vice-president of Camp Forming, then visited Jhajj's office and offered an apology for her employees' actions.

"I really do appreciate her coming out to apologize and especially bringing the names forward to the police," Jhajj told CTV News Toronto.

"It's hopefully going to help us resolve this issue, and again I hope we can all move forward in a respectful manner."

- with files from Cristina Tenaglia