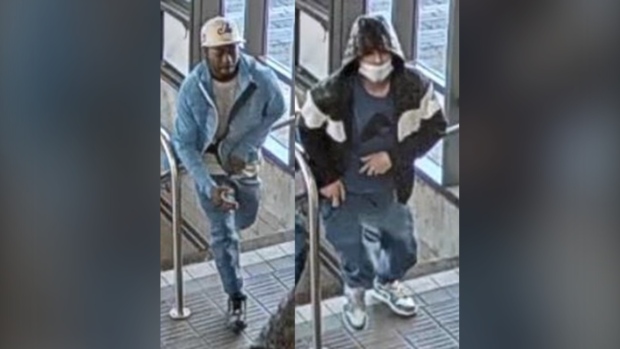 Police are looking for the two men seen in the photo in connection with an assault and robbery investigation. (Toronto Police Service)

Toronto police have released security camera images of two suspects they are looking for after an assault and robbery at a TTC subway station left one man injured.

Police said it happened on June 4 at Don Mills Station. A man got off a bus and walked into the station when he became involved in a verbal altercation with two people.

The two allegedly physically assaulted the man and then snatched his cellphone, police said.

The victim was taken to the hospital for treatment.

On Sunday, police released the descriptions of the male suspects. The first one is described as five feet and eight inches tall with a slim build and was wearing a mask, a black jacket with a white horizontal stripe, blue jeans, and black and white shoes.

The second suspect is described as five-foot-six with a slim build and was wearing a blue coat, blue jeans and a Montreal Expos hat.

Police are asking anyone with information about the two suspects to contact them at 416-808-3300 or Crime Stoppers anonymously.