The debate was hosted by the United Jewish Appeal Federation of Greater Toronto and the Centre for Israel and Jewish Affairs. Candidates Olivia Chow, Doug Ford, Ari Goldkind and John Tory were in attendance.

The uproar began when candidates were asked what they would do to make Toronto a safer community for the Jewish community.

Goldkind, who is Jewish, brought up an allegation that Ford’s brother, Mayor Rob Ford, had used a racial slur against Jews.

“I would start on the issue of anti-Semitism by not having a mayor who refers to us, the people in this room, the Jewish people in this room, with a derogatory name that starts with K,” Goldkind said. “The fact that he insulted my religion whether it was under the influence or not, we cannot have a mayor like that because that is where it starts.”

Ford barely got all his words out when the crowd erupted in laughter and boos. He had to ask the crowd of approximately 600 people several times to let him finish what he had to say, and even the moderator had to step in to ask the crowd to let Ford finish.

Goldkind shot back by saying that he was giving the councilor “an easy one.”

Goldkind was referring to an allegation that the mayor had been recorded uttering racial slurs last year against a number of diverse groups of people.  According to a Toronto Star report, the mayor allegedly said, “Nobody sticks up for people like I do, every f---ing k--e, n----r, f---ing w-p, d-go, whatever the race. Nobody does.”

During an interview with CP24 in July after returning from a two-month stint at a rehab facility, the mayor offered a general apology to everyone he offended blaming his language on his substance abuse.

Mayor Ford, who is scheduled to begin his second round of chemotherapy on Tuesday, came in partway through the debate and Goldkind said the mayor's decision to attend a debate hosted by the city's Jewish community showed “a tremendous amount of chutzpah.”

Counc. Ford, for his part, said the mayor had apologized.

“I have told [the mayor] very clearly that was unacceptable,” Ford said.

The topic was subsequently dropped when the moderator said, “Let’s leave it at that.”

After the debate, both Ford brothers left the building without taking questions from reporters. Goldkind told reporters that he would have liked to hear an apology before the debate, and Chow lent support to his call for an apology.

“I believe Mayor Rob Ford should apologize for his hateful and anti-Semitic statements in the past, but that’s up to him to do so,” Chow said. “I believe his comments from previously have no place in this city and it is hateful and hurtful.”

Tory waded into the issue to say that “elements of discrimination” exist within Toronto that are not confined to Jews, and that he hopes to “make that not a part of the way we live.” 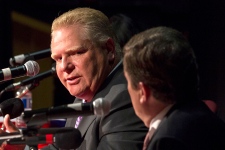 Doug Ford, left, looks over at John Tory as he takes part in a mayoral debate in Toronto on Tuesday, Sept. 23, 2014. (The Canadian Press/Chris Young)