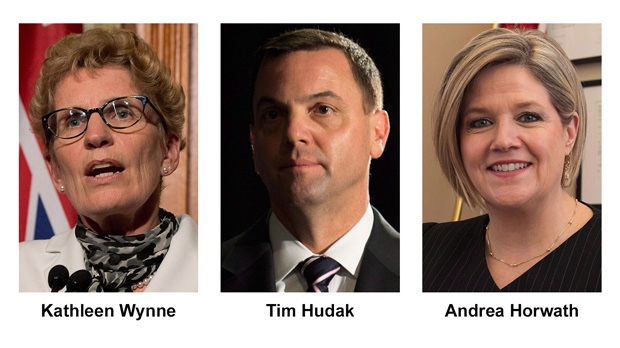 Kathleen Wynne and the Liberal party are starting to close the gap in the provincial election race with just two weeks to go until Ontarians cast their ballots, a new poll has found.

The CP24/CTV Ipsos Reid poll of 868 Ontarians has determined that the Liberals now enjoy the support of 34 per cent of decided voters (up three points from last week), compared to 36 per cent for Tim Hudak’s PC Party (up one point), 23 per cent for Andrea Horwath’s New Democrats (down five points) and seven per cent for the Green Party/Other (up one point).

About 17 per cent of respondents remain undecided.

Tories continue to have most motivated support

The two-point gap seems to represent a big turnaround for Wynne who had trailed Hudak by as many as nine points two weeks ago, but there may be more to the story.

According to the poll, the Tories continue to have the most motivated supporters with 41 per cent of those who said only an emergency would keep them from the polls intending to vote PC compared to 29 per cent for the Liberals, 25 per cent for the NDP and four per cent for Green Party/Other.

“While the Wynne Liberals appear closer to the Hudak PCs on the popular decided vote, until they motivate their supporters and galvanize a higher turnout at the ballot box they could be swamped by a PC surge that has remained adamant to turn up and vote from the outset of the campaign,” an analysis from Ipsos-Reid accompanying the poll states. “The Liberal turnout vote, at this stage leading into the debate, is mostly anemic, unmotivated and disengaged.”

The Liberal gains in overall support among decided voters may be in part attributed to gains the party has made in the 905.

Despite trailing the Tories in the bedroom communities outside Toronto for the entire campaign, the latest Ipsos-Reid poll gives Wynne and the Liberals a slight lead with 38 per cent support compared to 34 per cent for Hudak and the PC party and 21 per cent for Andrea Horwath and the NDP.

The Liberals have also added to their lead in Toronto proper, now enjoying the support of 44 per cent of respondents (up four points) compared to 25 per cent for the Tories (up three points) and 22 per cent for the NDP (down 10 points).

The poll was conducted between May 26 and 29 and is considered accurate to within 3.9 percentage points.