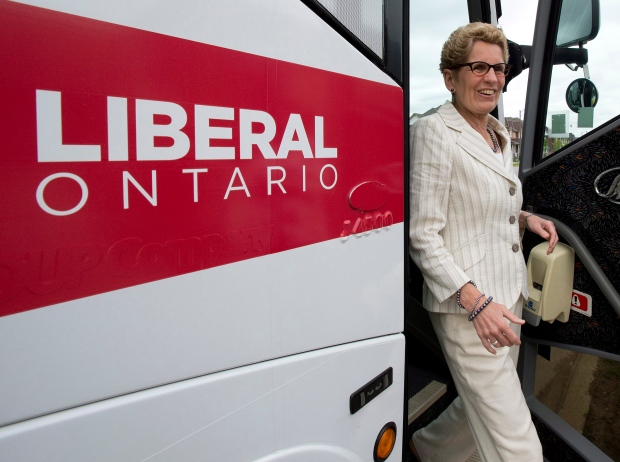 Ontario Liberal leader Kathleen Wynne arrives at a campaign stop in Markham, Ontario on Wednesday May 28, 2014, 2014. THE CANADIAN PRESS/Frank Gunn

Ontario Premier Kathleen Wynne said Friday that all Ontarians would have guaranteed access to around-the-clock primary health care by 2018, if her Liberals are re-elected.

"We need to recognize that everyone in the province has the right to have that kind of access," she said at the site of a new seven-storey patient tower being built at Joseph Brant Hospital in Burlington, Ont.

Unveiling her "Primary Care Guarantee," Wynne said the Liberals have made vast improvements to health care over the past decade by reversing cuts imposed by former PC premier Mike Harris's government.

Almost 5,000 new doctors and more than 20,500 new nurses have been hired, she said, improving surgical wait times and introducing Canada's first nurse practitioner-led clinics with 25 communities across the province.

"Because of the action that we've taken, today 93 per cent of Ontarians have access to a primary care physician or a nurse practitioner," she said.

"But I don't think we should be satisfied until that number is 100 per cent."

Wynne said her pledge is in stark contrast to what she called the "reckless" proposal to cut 100,000 public sector jobs announced by Progressive Conservative Leader Tim Hudak. Such cuts "will have a significant impact" on health-care providers and services, she said.

"The fact is that Tim Hudak is putting all of this at risk, all of those advances that we've made and this guarantee that we can deliver on ... He's putting that at risk with a reckless commitment to fire 100,000 people if he forms government," she said.

"You cannot have those kinds of cuts without having an impact on health care, it is not possible to make that kind of cut across government and not have an impact on the provision of health care."

The Liberals say 28 hospitals were shuttered under the previous Tory government, adding that their guarantee that everyone will be able to reach a family doctor or nurse practitioner at any time would cost less than $20 million.

"Providing access to the last seven per cent of the province will not be easy ... but we must do this," she said.

"This is the part of the population that is the most difficult to reach, and therefore is hardest to provide access to care."

"But that is our commitment, to reach all of these Ontarians. It's my commitment as the leader of the Liberal party and what we will follow through on if I am privileged to be premier after June 12."

The Ontario Medical Association said Friday that more than 700,000 Ontarians lack access to a primary care provider and called for "meaningful debate from the leaders on their plans for improving timely access to health care."