Notes from the Campaign Trail: Horwath gives it a third try 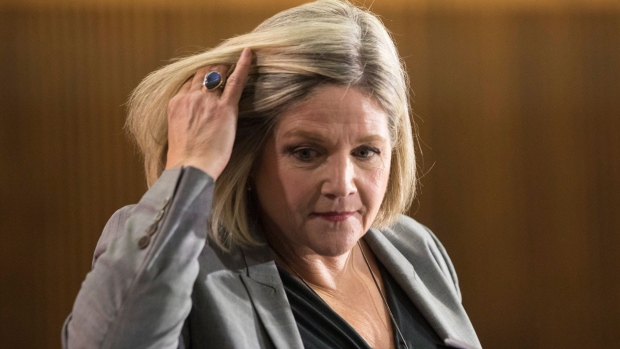 Ontario provincial NDP Leader Andrea Horwath turns after taking questions from journalists during a pre-budget lock-up, as the Ontario Provincial Government prepares to deliver its 2018 Budget at the Queens Park Legislature in Toronto on Wednesday March 28, 2018. THE CANADIAN PRESS/Chris Young

Andrea Horwath, the leader of the Ontario New Democrats, is beginning her third campaign for Premier. Her first two campaigns failed to generate a lot of interest in Ontario. Back in 2011, Horwath’s first as leader, the NDP did pick up seven seats and then in 2014 the party added another four seats. Now, in 2018, Horwath has to find a way to get the attention of Ontario voters. It is probably her last chance – failing again is not an option if she wants to keep her job as leader of the party.

A poll released today from Innovative Research Group shows just how big the challenge is for the NDP. Like most other polls over the past couple of weeks the Progressive Conservative Party has a significant lead with 44 per cent of the decided vote. But unlike the IPSOS poll last week today’s poll has the NDP trailing the Liberals at 22 per cent four points behind the unpopular government of Liberal Kathleen Wynne.

The NDP has had difficulty winning over voters across the province. Today, to meet that challenge, Andrea Horwath released her party’s platform. It struck me as very early to release the platform. I checked back to 2014. In that campaign the NDP platform was released about three weeks before election day. But then I went back a bit further to 2011 and the NDP platform was released almost five months before the vote. So the party has tried early and late and opted for early again in this campaign.

This platform is heavily loaded with expensive health care measures including improving dental care access, free pharmacare – a universal prescription medication plan – and allocating hundreds of millions of dollars to improve hospital care for Ontarians. The NDP says it will find some of the money for its promises by raising corporate taxes and upping income tax on those making more than $220,000 a year. And there is no talk of a balanced budget in this platform.

The platform takes on the Liberal promise on day care upping the ante and promising free day care for families making less than $40,000 and capping the cost of day care at $12 a day. And to address the Conservative Party drum beat on Hydro One and electricity rates Horwath promises a 30 per cent reduction in rates and buying back Hydro One. The NDP are calling the Platform “Change for the Better.” Rolling back electricity rates would be a change for the better but hard to deliver.

Horwath told her supporters “people are fed up with politicians offering nothing more than soundbites” and then she let loose with a series of her own like; “I am running to be the next Premier of Ontario” and “who will replace Kathleen Wynne” or “The people decided it’s time for a change. The question is what kind of change”? And she had a warning for voters considering Conservative Doug Ford, “That’s going from bad to worse.” And it was all in English. Horwath managed a couple of sentences in French and in her news conference was forced to admit that the French translation of the platform is not ready.

Horwath will repeat those lines across the province over the next eight weeks. But I am sure both the Liberals and Conservatives will challenge her promises and the costings provided today. One thing today’s release does is allow Horwath to hold up her pamphlet and ask where and when Doug Ford will announce his party’s policies. The Liberals will also have a formal platform announcement sometime in May but much of its plan is already out there.