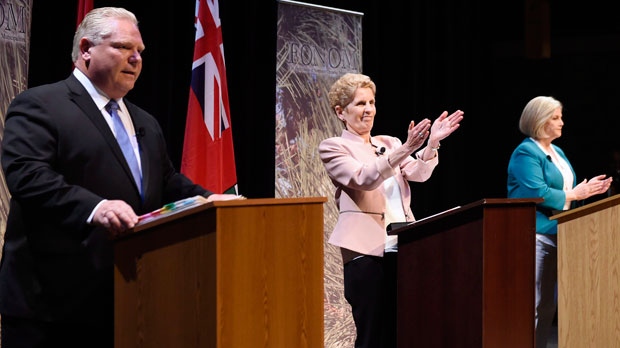 The pollsters and pundits all told me the May long weekend would be an important few days. They said to watch for movement in support for the three main parties in the Ontario election campaign. Now an IPSOS poll taken over the weekend suggests something is happening out there. The poll finds the NDP on the rise with 37 per cent of decided voters – an increase of two points over last week. The Progressive Conservatives slipped four points to 36 per cent and the Liberal party is holding onto 23 per cent of support. This is an online poll with a margin of error of +/- 3.5 per cent.

An analysis of recent Ontario polls by LISPOP released today still has the PCs on top. LISPOP takes recent polls and projects a seat count. Its analysis still gives the Progressive Conservatives a majority of seats but Barry Kay of LISPOP cautions, “while the Conservatives have the largest number of seats, a majority is by no means assured at the moment.” So, as they say, game on!

This will be an important week that leads up to what will be a high stakes television debate next Sunday evening. For the leaders it will be a long, challenging week with each one trying to sell a vision for Ontario. Now sitting in third place, Liberal Leader Kathleen Wynne has the biggest challenge.

Today, she put a brave face on saying the Liberals are committed to fighting for every riding across the province. Then she admitted what everyone knows saying, “This is a challenging election for us.” Wynne explained her party’s position on the sale of alcohol and cannabis. She talked of the need for a “responsible approach” and accused Progressive Conservative Leader Doug Ford of a plan that will put cannabis, wine and beer beside candy bars in corner stores. Then Wynne turned to the NDP platform saying it doesn’t fund various programs to deal with training and enforcement issues needed during the introduction of legal cannabis sales. Wynne spent half an hour talking about her policies and she answered 11 questions including follow ups on everything from recent polls, her campaign strategy and the faults of her opponents.

Andrea Horwath chose to talk about the need for skilled training programs. With that out of the way she turned her attention to Doug Ford and tried to minimize the attention on her party’s platform numbers not adding up. Horwath warned Ford wants to give $5 billion to the richest in Ontario while the NDP want to tax the very richest. On that big hole in the NDP platform numbers, she said she acknowledged the mistake. “We admitted it and were honest about it,” she said. Horwath then pointed out Ford still hasn’t presented his costed platform.

Pollster Nik Nanos, of Nanos Research, says the NDP platform accounting misstep could cost the NDP. In an interview on CP24 he said, “It’s important for the numbers to add up.” He went on to say it “creates a level of hesitation” in the minds of voters. Horwath also spent about half an hour with reporters and answered 14 questions on health care, taxes, her party’s platform mistake and making Ontario a sanctuary province.

Again today, Ford waited until the afternoon to make his first public appearance of the day. A month ago, Ford’s short statements attacked Wynne and the Liberals again and again. He ignored the NDP. Those polls are having an effect on the PC strategy. Today, Ford didn’t use the words “Liberal” or “Wynne” once. Instead, in a four minute statement attacking the NDP commitment to close the Pickering nuclear plant Ford repeatedly called the NDP “radical.” Ford went to Pickering to focus on the NDP proposal to close the plant. Ford made the future of the Pickering power plant all about jobs. He didn’t deal with the reality that the nuclear facility is now 47 years old – the fourth oldest in North America. Ford took five questions mostly about the continuing issues surrounding the revelation about the theft of data from 407 ETR and how PC candidates might be connected to it. His appearance this afternoon took less than nine minutes from start to finish.