22-year-old man has critical injuries after shooting in Brampton

A 22-year-old man is in life-threatening condition after a shooting in Brampton overnight, Peel police say.

Shortly after 2:15 a.m. on Thursday, police responded to a shooting in the area of Mayfield Road and Van Kirk Drive.

A man was located with gunshot wounds and transported to a trauma centre in critical condition, police said.

The victim is a resident of Brampton, Peel police Const. Akhil Mooken said at the scene.

"Our forensic identification bureau was already on scene this morning and have conducted their preliminary investigation...They will be returning at some point during the day today to conduct another canvass of the area to see and determine, if they can, how many rounds were fired," Mooken said. 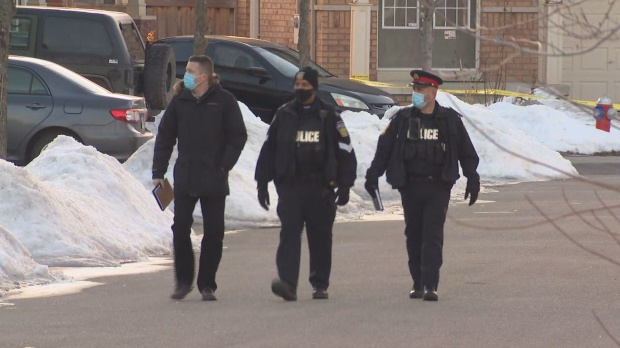 He said no information on suspects is available.

"We do not have at this time any information on suspects or suspect vehicle descriptions. That's why it's important for us that any member of the public that has any information to contact investigators or contact Crime Stoppers," Mooken said.

Anyone with surveillance video of the area is asked to contact police.

Roads in the area are closed as police continue to investigate.

A 22-year-old man is in hospital with life-threatening injuries after a shooting in Brampton on Feb. 25.