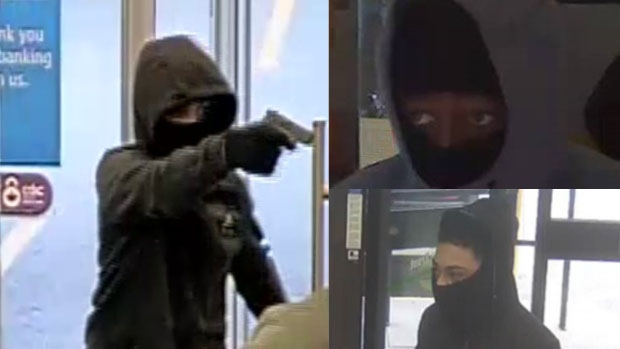 Police are looking for three suspects in connection with a series of bank robberies in Toronto and Peel Region in October. (Supplied)

Peel police, Toronto police and the Canadian Bankers Association are offering a $25,000 reward for information leading to the arrest of three suspects in connection with a series of armed bank robberies.

The suspects were involved in several bank robberies in Toronto and the Peel Region between Oct. 9 and Oct. 16, police said in a news release Saturday.

Investigators said the suspects entered the banks in disguise and armed with handguns and demanded cash.

“The suspects committed these gunpoint robberies in a violent manner without any regard for public safety,” police said.

The suspects are described as black males, in their late teens and early 20s, stand five-foot-eight to six-foot-tall, and with a thin to medium build.

Investigators are appealing to the public who may have information regarding the robberies to contact police or Crime Stoppers.