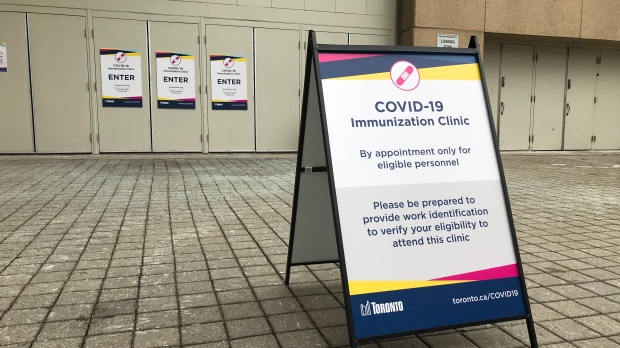 An additional 30,000 appointments for a shot of the Moderna COVID-19 vaccine will be added to city-run clinics next week, marking the first time Toronto’s mass immunization sites have offered anything but the Pfizer mRNA vaccine.

The new appointments, the city said, are being added to the system in response to the “unprecedented demand for second dose vaccine appointments.”

Last week, the province announced that all residents in Delta variant hot spots, including Toronto, who received their first dose of an mRNA vaccine on May 9 or earlier are eligible to book their second dose immediately.

The additional appointments at city-run clinics, which will be added to the system on Wednesday at 8 a.m., will be offered between June 22 and June 27 and will be for Moderna shots only. The city says the provincial system will not indicate which vaccine is being provided and people who book one of these appointments will not be able to request another vaccine.

“Eligible individuals should be aware that almost all available appointments as of tomorrow will be for Moderna doses,” the city said in a news release issued Tuesday.

“The Moderna and Pfizer vaccines are incredibly similar with near identical efficacy rates. A ‘mixed mRNA model’ – mixing Pfizer and Moderna for first and second dose – is approved by both the federal and provincial governments.”

Past Moderna shipments allocated to Toronto have previously been used by hospital partners and pop-up clinics.

“We are doing everything we can as a city with the supply we have from the other governments to help people get vaccinated. These additional appointments next week will help more people get vaccinated as soon as possible,” Mayor John Tory said in a written statement released Tuesday.

“We are making tremendous progress on getting residents vaccinated and we are determined for that progress to continue across the city so we can bring this pandemic to an end.”