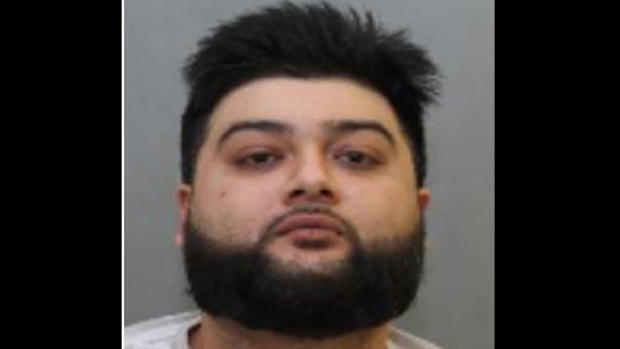 Rizwan Gharda, 31, is shown in a Toronto police handout image.

Police in Toronto say they have arrested and charged three people in a lengthy drugs probe that netted 80 kilograms of cocaine and a pistol modified for fully automatic fire.

Beginning in Oct. 2020, police say they started a probe based on reports that two individuals were in possession of firearms and large quantities of illegal drugs.

They later searched homes and cars belonging to two GTA men and allegedly found a large quantity of drugs including 80 kilograms of cocaine, two kilograms of fentanyl, five kilograms of crystal meth and 500 grams of heroin.

They allegedly also found $93,000 in cash, a subcompact Kel-Tec pistol with a laser sight, a Glock 26 handgun and a Glock 19 compact handgun that was modified to allow fully automatic fire.

Officers also allegedly located three over capacity magazines for pistols. One of the guns also had an altered serial number, police allege.

Thirty-three-year-old Shaan Tareen of Whitby was charged with 24 offences including possession for the purpose of trafficking, possession of a prohibited firearm and conspiracy to traffic a controlled substance.

Thirty-one-year-old Rizwan Gharda of Toronto was charged with 25 offences of the same nature.

A 27-year-old Toronto woman was charged with three offences related to drugs possession and possession of the proceeds of crime.

All three appeared in court at Old City Hall on Jan. 13.

A Kel-Tec subcompact handgun with a laser sight is shown in a TPS handout image.

Bricks of cocaine seized during 'Project Tundra' are shown in a TPS handout image.

Shaan Tareen, 33, is shown in a Toronto police handout image.