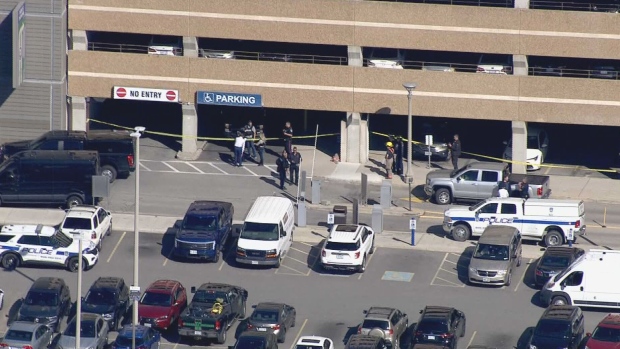 Peel Regional Police were near Credit Valley Hospital in Mississauga "dealing with a barricaded person" on Sept. 30, 2022.

A 66-year-old Calgary man has been charged after barricading himself inside a Mississauga medical building with several firearms for 17 hours on Friday, Peel Regional Police say.

Police responded to a medical office building in the area of Eglinton Avenue West and Erin Mills Parkway, near Credit Valley Hospital, at around 7:40 a.m.

Upon arrival, officers were alerted to an individual who had several firearms and had barricaded himself in the building, police said.

“This individual presented a significant risk to public safety, as well as the safety of all responding officers, as this building is in immediate proximity to a major health care facility that provides critical care to the residents of Mississauga and beyond,” police wrote in a news release Saturday evening.

The CNT maintained continuous contact with the barricaded individual in order to achieve a peaceful surrender, police said.

Shortly after midnight on Saturday, the incident was resolved and police said the individual was taken into custody, ending a 17-hour standoff.

“Incidents such as this are extremely stressful and unpredictable. Every team member involved in this incident were determined to desescalate and resolve the interaction in a safe and professional manner, keeping everyone’s safety as their highest priority,” police wrote.

Police Chief Nishan Duraiappah commended emergency responders for their "professionalism" and "commitment to public safety," which he said is the reason why the outcome of this incident was a positive one.

Our members navigated a highly complex incident with a heavily armed person in a public place for over 17 hrs. The male entered a medical facility near a hospital & took an innocent person hostage. Professionalism & a commitment to public safety = a safe outcome. Thank You #PRP https://t.co/LdT3aEMkyB

William Horodyski, a 66-year-old man from Calgary, is facing eight charges, including false alarm of fire, mischief, careless use of firearm, possession of a weapon for a dangerous purpose, three counts of forcible confinement and mischief lawful enjoyment.

Police have released images of the firearms that were collected at the scene.

Investigators said this was an isolated incident and that there is no longer a risk to public safety.

“Investigators from the 11 Division Criminal Investigation Bureau will be working closely with the Calgary Police Service over the next number of weeks in an attempt to understand fully the nature of the incident, and the motives of the individual charged,” police wrote.

Peel Regional Police have released images of firearms collected from the scene after a 17-hour standoff at a medical building in Mississauga on Sept. 30, 2022.

Peel Regional Police say several firearms were collected from the scene after a man allegedly barricaded himself inside a medical building in Mississauga on Sept. 30, 2022.