8 people injured, widespread damage reported after tornado touches down between Barrie and Innisfil

A tornado ripped through a Barrie neighbourhood on Thursday afternoon, injuring eight people, uprooting trees, destroying homes, and flipping over at least one vehicle.

The storm touched down in the Prince William Way and Mapleview Drive area of southeast Barrie at around 2:40 p.m., shortly after Environment Canada first issued a tornado warning for a wide swath of the region.

Simcoe County paramedics said they transported eight people to hospital, four of them with serious injuries. Officials described the damage from the storm as “catastrophic” and not unlike what you might encounter in a “war zone.”

Speaking to reporters Thursday evening, Barrie Mayor Jeff Lehman said there are no confirmed fatalities at this time, and everybody is accounted for.

“I think that we are so fortunate tonight not to be standing here talking about the loss of life,” Lehman said.

He noted that emergency crews are conducting a second search especially in the most affected areas of the city.

“I know this is an incredibly difficult day. But giving our first responders the time they need to do that search to make sure that the homes are safe that the people are safe is job number one,” he said.

Thursday’s weather event was reminiscent of the tornado that hit Barrie 36 years ago, Lehman said. The 1985 tornado killed eight people and destroyed 600 homes.

“It's shocking. You never expect to see it again, a disaster like this in your community. And yet, here we are,” he said.

“I can't tell you how incredible it is that nobody has been killed. And I hope that as all the secondary searches are completed and the patients are treated at the hospital that that continues to be the case because this certainly could have been a much more serious disaster.”

Barrie Fire Chief Cory Mainprize said they responded to multiple calls for down wires, gas leaks and damaged buildings. He noted that approximately 20 to 25 structures suffered significant damage, making them uninhabitable. Of those, three were completely destroyed.

An evacuation centre has been set up to accommodate those whose homes have been destroyed. Officials did not provide how many people were displaced.

“Some people will require some supportive housing. We will work with our partners at Red Cross in the county to provide that to anyone who needs it,” Mainprize said. “Whatever needs come up we’ll do our best to be able to meet them and I'm sure with the support of the community we'll be able to do that.”

He said crews will remain on the scene to conduct further searches and assist people in retrieving personal items.

“We will remain on scene for as long as required to support our community during this event,” Mainprize said.

CP24 Meteorologist Chris Potter, who lives in the area, said that the storm appeared to be on the ground for about 10 to 15 minutes and left an approximately two-kilometre path of destruction in its wake.

He said that there are literally “hundreds” of uprooted trees and some homes that appear to be "completely destroyed."

Video footage shared on social media also showed several appliances on the ground outside of a home missing its entire roof. In the video, the homeowner can be heard remarking that the "Jeep is gone."

“I literally just started my shift at 2:30 p.m., turned on the computer, turned on the radar and noticed some pretty intense thunderstorms in our vicinity. We lost power almost a minute later and I went outside and saw massive debris field coming towards my house and my neighborhood is absolutely destroyed, devastated,” Potter said. “There's so many houses in this area that have at least minor damage, but there's almost more with extensive damage.” 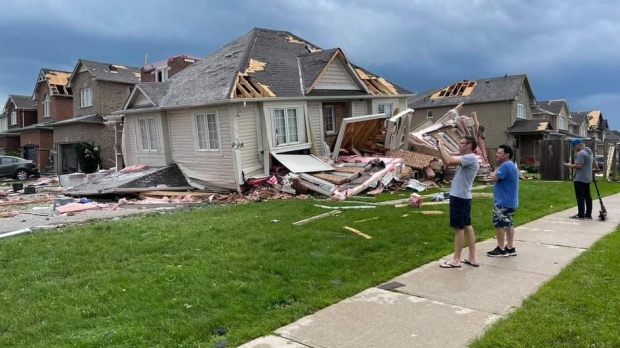 Tornado warning was issued minutes ahead of storm touching down

But within minutes the possible tornado had touched down in the Barrie area and there were widespread reports of damage.

Steven Flisfeder, who is a meteorologist with Environment Canada, said that the weather agency did issue a severe thunderstorm for the area earlier in the day that warned that the conditions were favourable for the development of a tornado but he said that by the time it became clear that a tornado was actually forming there was unfortunately “very little time” to warn residents.

“The heat and humidity and the low levels are kind of the building blocks, the fuel for the storms to form and then with a trigger like a cold front, lifting that air mass into the air and making it produce as much a storm as it can that that's what we're seeing today with these storms,” he said. “We see storms every summer. Storms like this are fairly frequent. But you never know when exactly it's going to happen or where it's going to happen. You just see the ingredients coming together and hope you're not in its path.” 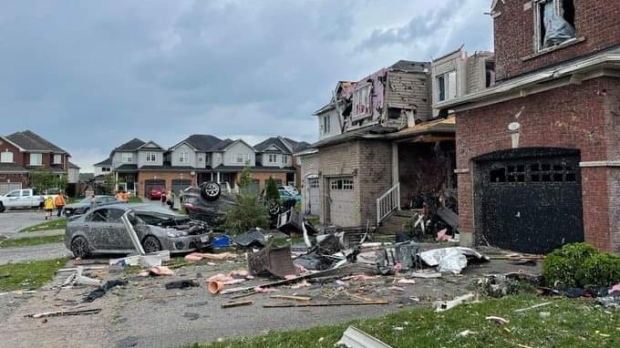 Flisfeder said that Environment Canada will have to send a survey team to Barrie to confirm that the storm was in fact a tornado but he said that based on the images that he has seen that is “very likely” the case.

Potter, CP24’s meteorologist, said that he got his family to go into the basement upon realizing what was happening. He said that while he couldn’t actually see the funnel cloud himself from his vantage point, he could see “strong rotation" as the storm whipped up debris.

“Strong gusting winds, a downburst, a microburst, that doesn’t cause this kind of damage. This is a track and you can clearly see where this tornado actually tracked,” he told CP24. “It is a fairly large neighbourhood and one side of it was completely untouched while the other was complete devastation. There is no question, ask anyone else in Barrie, this was a tornado."

Thousands of homes and businesses remain without power in the area. Alectra said many customers will have their electricity restored overnight but some may be without power until Friday afternoon.

“These strong gusts caused substantial damage to overhead powerlines that supply electricity to parts of Southeast Barrie. Alectra Utilities crews are currently investigating and assessing the damage and will continue to work until all power has been restored. Additional crews have been called in to assist with restoration efforts,” the company said in a statement.

Meanwhile, GO Transit has closed its Barrie South station for the time being due to the storm.

In a message posted to Twitter on Thursday afternoon, Premier Doug Ford said that his thoughts are with everyone in Barrie and Innisfil that have been affected by the severe weather.

"Please stay safe everyone," he said. 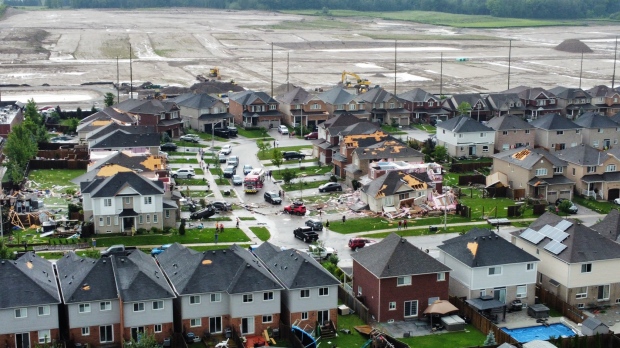 Damage left after a tornado touched down in a neighbourhood in Barrie, Ont., on Thursday, July 15, 2021. THE CANADIAN PRESS/Christopher Katsarov

An overturned car is pictured after a suspected tornado touched down in Barrie, Ont. Thursday, July 15, 2021. (Courtesy: Stephen Elliott)