A 99-year-old war veteran is walking with the fishes on Tuesday as part of his mission to walk a million steps to raise money for charity.

Marvin Gord, along with some of his family, is taking a long stroll inside Ripley’s Aquarium today as part of his pledge to walk a million steps by his 100th birthday on New Year’s Eve, to help raise one million dollars for the Baycrest Foundation.

“This particular project started July the first and I’ve been doing about 20 miles a week until New Year’s Eve, when everybody celebrates my birthday,” Gord said at Ripley’s Aquarium. Rafi Yablonsky from Baycrest said Gord chose the aquarium as part of his walkathon because it would be a new experience for him.

[He] wanted to come and walk at different landmarks and the first landmark he chose was Ripleys because he has never been here. And he thought what a great way to come walk and spend the day with his grandkids and great-grandkids here,” Yablonsky said.

Gord has already knocked off more than 500,000 steps as part of his Marvin’s Millions for Baycrest campaign and hopes to walk a total of 800 kilometres, a distance equivalent to walking between Toronto and New York City. 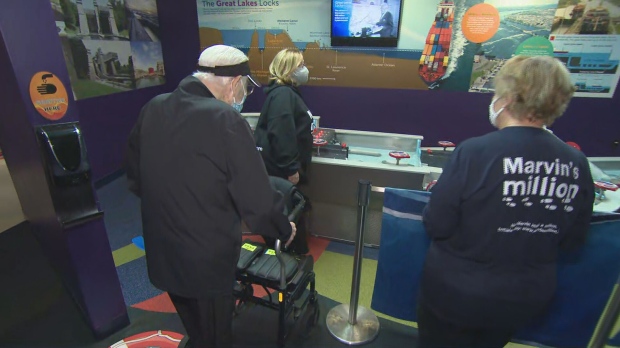 The North York senior is tracking his distance using a pedometer. Gord said he has gone on many strolls across the city in an effort to reach his goal in time.

“All over the city, mostly in the west end of the city,’’ he said while commenting on where he has walked. “I don’t really keep track of it, because I don’t have a special meet. I just walk until I’ve done about 10,000 steps.”

Gord said his mission was inspired by English war veteran Tom Moore, who raised a significant amount of money for a charity by releasing a musical single and completing 100 laps around his garden before his 100th birthday.

Gord’s daughter, Lisa Hemi, joined her father on today’s walk and said he has inspired many to get moving.

“My dad started walking after his first heart attack. He’s walked everyday for the last umpteen years,” Hemi said. “We’re very proud of my father, he’s about to be 100 years old and to even think of doing this for that community is incredible.”

The money raised from Marvin’s Millions for Baycrest will help support Baycrest’s Safeguarding Our Seniors Campaign to purchase COVID-19 protective measures and medical equipment and equipment to treat patients via telemedicine. 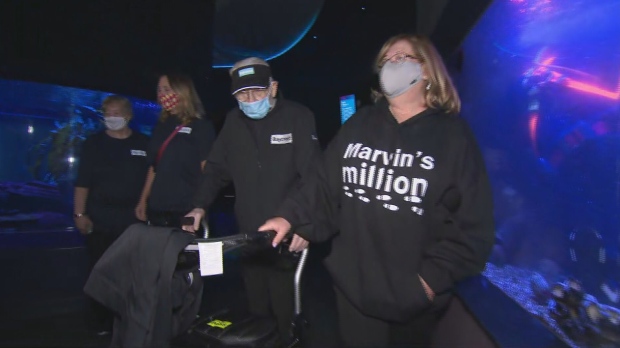 Gord has been known to take on great feats throughout his life, including serving as a radar specialist in the Second World War, becoming a pharmacist, lawyer and a finance and human resources professor.

The almost centenarian chose to raise money for Baycrest because of his personal ties to the organization as his wife, mother and aunt all have used Baycrest’s services.

Gord plans to celebrate turning 100 years old with family and is looking forward to getting a letter from the Queen wishing him a happy birthday.