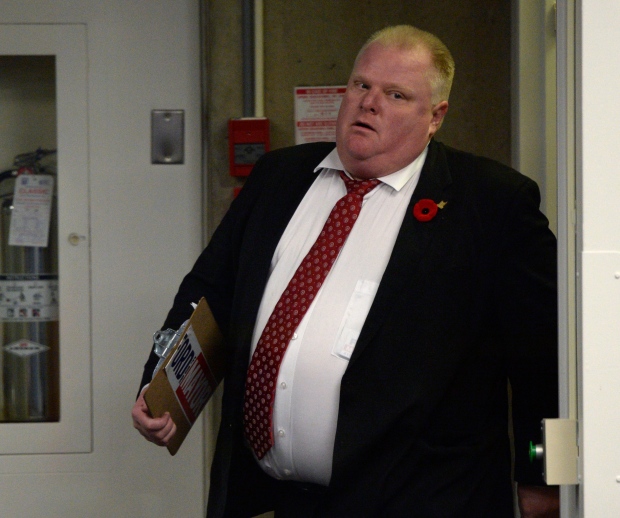 Mayor Rob Ford heads to his office at city hall in Toronto on Thursday, Oct. 31, 2013. (The Canadian Press/Frank Gunn)

TORONTO -- Toronto Mayor Rob Ford has been embroiled in a series of controversies since before he was elected to the city's top job in October 2010. Here are some of the more notable moments that made headlines:

Aug. 19, 2010: As the municipal election campaign heads into the home stretch, Ford holds a news conference to discuss a 1999 arrest in Florida for driving under the influence and marijuana possession. He ultimately pleaded no-contest to the impaired driving charge and the drug charge was dropped.

June 2011: Ford angers the city's gay community by declining to attend either the city's gay pride parade or the flag raising ceremony to kick off Pride week. Ford said he would be at the family cottage for the parade. His decision broke with tradition that saw the city's three previous mayors march in the parade.

July 26, 2011: A Toronto woman accuses Ford of giving her the finger after she asked him to get off his cellphone while driving. Ford says the incident was a misunderstanding.

Oct. 5, 2011: Another woman accuses Ford of talking and texting on his cellphone while behind the wheel. Calls flood in for the mayor to hire a driver, but Ford declines and describes such an expense as a waste of taxpayer dollars.

Oct. 25, 2011: Ford makes numerous calls to 911 after being accosted by a crew from CBC's "This Hour has 22 Minutes." Ford says he felt threatened by the presence of the crew and alleges they scared his daughter.

March 12, 2012: Toronto resident Paul Magder launches a lawsuit alleging Ford had a conflict of interest when he voted on a council matter involving his football charity. The matter eventually worked its way to court where Ford was found guilty of the charge, only to have the ruling overturned on appeal.

May 2, 2012: Ford calls police after a confrontation with Toronto Star reporter Daniel Dale. Ford alleged Dale was spying on him at his home, while Dale contended he was on public property doing research for a story. Dale alleged he was physically threatened by the mayor, a claim Ford denied.

Sept. 19, 2012: While on an official visit to Chicago, Ford mistakenly identifies Winnipeg as a city located across the border from Detroit. Winnipeg Mayor Sam Katz volunteered to give his Toronto counterpart some geography lessons, since Winnipeg is roughly 1,800 kilometres from where Ford had said it was.

Nov. 6, 2012: Ford comes under fire after a Toronto Transit Commission bus was emptied of passengers and rerouted to collect his football team. Police say the decision to commandeer the bus was made by an officer and not Ford. Ford himself placed at least two calls to the head of the TTC requesting information on the bus when it failed to show up as promptly as expected.

March 8, 2013: Ford vehemently denies allegations from former mayoral rival Sarah Thomson that he touched her inappropriately during a political dinner. Thomson claimed the mayor was behaving oddly and made suggestive remarks before grabbing her.

March 24, 2013: Ford calls into a local radio show to complain about the defence tactics used in a high profile court case. Ford scorned the "not criminally responsible" defence that was successfully used on behalf of a man who killed a police officer while driving a stolen snowplow. Ford's comments drew criticism from the defence lawyer, who called them "prehistoric" and took the mayor to task for speaking out as deliberations began.

March 26, 2013: Ford denies a published report that he was turfed from an official dinner due to drunkenness and an ongoing battle with alcohol addiction. Ford described the Toronto Star story as an "outright lie."

May 16, 2013: Reports surface in both the Toronto Star and U.S.-based news site Gawker that Ford was seen on video smoking what appears to be crack cocaine. The Toronto Star also reported that Ford can be heard referring to Liberal leader Justin Trudeau in disparaging terms. The video could not be independently verified, as the purported videographer was demanding a six-figure dollar amount for it. Ford has denied allegations of drug use and said the video does not exist. To date it has not surfaced.

Aug. 9, 2013: Videos appear on YouTube showing Ford interacting with fellow attendees of a local street festival. Ford is slurring his speech and allegations surface that he was drunk. Ford addresses the allegations on his radio show, saying he had "a couple of beers" but was not intoxicated.

Oct. 1, 2013: Ford's friend and occasional driver, Alexander Lisi, is arrested and charged with four drug-related offences, including trafficking marijuana. Ford defends Lisi the next day, calling him a friend and a "good guy."

Oct. 23, 2013: A Superior Court judge releases documents that show Ford wrote a character reference for Lisi following the man's conviction of threatening to kill a woman. The letter dated June 4, 2013, praises Lisi's leadership and work ethic and was part of a pre-sentencing report. Lisi is appealing his conviction.

Oct. 31, 2013: Chief Bill Blair announces Toronto police had recovered a copy of a video file that depicts images of Ford "consistent with those previously reported in the press." Blair refused to give details but said there was nothing in the video that would support the laying of a criminal charge. He said that as a result of discovering the video, Lisi was facing an addition charge of extortion.