'A light at the end of the tunnel': Canadians hug loved ones in post-vaccine reunions 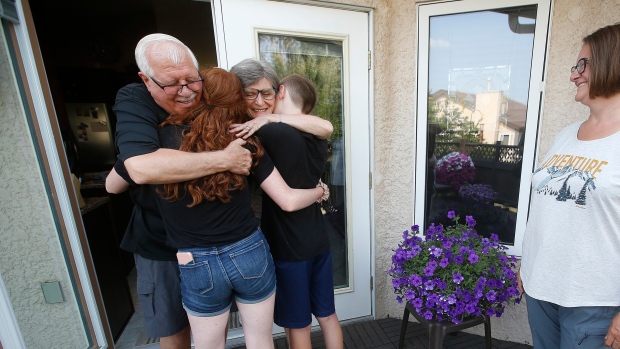 Richard and Linda Davis live only a short drive from their three daughters and seven grandchildren. But the Winnipeg couple says the COVID-19 crisis put a painful distance between them.

For 15 months, the Davises mostly saw their family's faces through a tablet screen. On special occasions, they could peer at them from the door during driveway visits, or stand two metres apart at the occasional outdoor gathering (weather and epidemiology permitting).

Linda Davis, 72, worried that her grandchildren wouldn't be able to "feel my love." When their second doses of the COVID-19 vaccine kicked in earlier this month, the Davises let family members know they were giving out free hugs.

It didn't take long for two of their grandchildren to take them up on the offer.

"For me, it was like a light at the end of the tunnel," Richard Davis, 74, said of the emotional embraces.

"We needed to know that this is coming to an end, and hugging them was a good beginning."

This summer, many Canadians are wrapping their arms around loved ones for the first time since COVID-19 turned physical intimacy into a contagion risk.

Some say these post-vaccination reunions can bring a bittersweet catharsis from prolonged pandemic separation, reminding us of the connections we cherish, as well as the moments we've missed.

"When I hugged my grandchildren, I realized, holy cow, are they ever bigger than they were," Linda Davis said.

"The pandemic changed us all in some way, and made us appreciate what we took for granted."

As vaccination rates rise and restrictions ease on travel and in-person gatherings, many Canadians say seeing their loved ones is their top priority this summer.

Even Canada's chief public health officer Dr. Theresa Tam took a break from her duties last week to get in some family time.

"Now that I am fully vaccinated, the thing I am most looking forward to is giving my parents a hug!" Tam tweeted.

In times of trouble, we tend to reach for the comforting embrace of those we care about, said Steve Joordens, a professor of psychology at the University of Toronto Scarborough.

Many Canadians were deprived of that form of physical support during the COVID-19 crisis, said Joordens, so hugging each other again can be a powerful restorative gesture.

"If we're going to hug somebody we love, it really implies that we feel safe, because we've all been scared of what this could do to our loved one," he said.

"That's a really critical ritual for us all to go through."

These embraces may elicit mixed emotions for some who reconnect with loved ones while still reeling emotionally from the events of the past year-and-a-half, said Joordens. But hopefully the pandemic has highlighted the value of sharing in one another's struggles, he said.

When Anita Szigeti of Toronto reunited with her best friends of 44 years, she said it felt like she held onto them for an hour, even though the hug probably only lasted a minute.

"It really had the effect of changing my whole outlook on life," said Szigeti. "I was not fully prepared for all of the emotions that I would have -- not just when I first saw them, but lingering for so long for the rest of the day and into the weekend."

But Szigeti said that profound sense of connection also brought home the weight of all that has been lost during the pandemic, including some relationships that didn't survive the strain of lockdown.

"Many of us have sustained serious losses interpersonally," she said. "We may have missed our last chance to hug people that we loved.... And even with the people who are returning into our lives now, we've lost this year-and-a-half with them."

Public health restrictions continue to prevent people from coming together, particularly those with relationships that cross international borders.

Every night before she goes to bed, 27-year-old Samantha Kemp asks her voice assistant device to count down the days until Aug. 28, when she'll make her way from Whitby, Ont., to Alabama to share her first kiss with her girlfriend on her 21st birthday.

Kemp said their friendship developed into a romance over the course of the pandemic. As excited as she is to go on her first date with her girlfriend of seven months, Kemp said she's worried that shifting travel requirements could get in the way.

"It's not that long, but it also seems like so long until I see her again," she said.

This report by The Canadian Press was first published July 21, 2021.