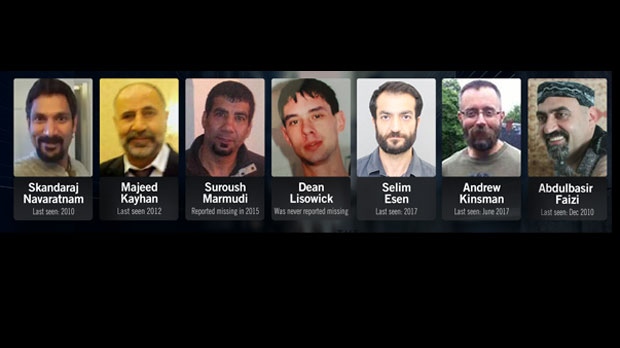 The alleged victims of Bruce McArthur are seen in this composite image.

TORONTO -- Here is a glance at the alleged victims of Bruce McArthur, a 66-year-old Toronto landscaper charged with seven counts of first-degree murder:

The 58-year-old Toronto man was reported missing in October 2012.

Police investigated his death as part of Project Houston, which ran from November 2012 to April 2014 and probed the disappearances of three men who went missing from Toronto's gay village.

The probe was closed after yielding neither suspects nor leads on what happened to the men.

The 50-year-old was reported missing in 2015 by his family in east Toronto.

Police have not said whether Mahmudi had any sort of relationship with McArthur.

Police believe Lisowick, of no fixed address, was killed sometime between May 2016 and July 2017. They say he was 43 or 44 years old and was never reported missing.

Kinsman, 49, was reported missing from the gay village in late June 2017. The Toronto man was a subject of Project Prism, and police have said he had a sexual relationship with McArthur.

Kinsman's sisters said they searched for their brother for six months before police eventually charged McArthur in his death. Karen Coles said he was "well-known in his community" and "loved by all."

The 40-year-old went missing in 2010 and his disappearance was investigated as part of Project Houston.

Faizi's family reported him missing to Peel Regional Police on Dec. 29, 2010. Investigators say the 42-year-old was last seen in Toronto's gay village. His vehicle was found near the home of one of McArthur's landscaping clients, where police allege McArthur left the dismembered remains of several victims in planters.

Faizi's disappearance was also investigated as part of Project Houston.