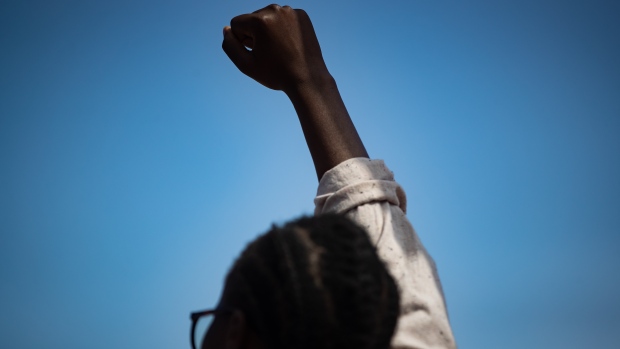 FILE - A person raises their fist in the air while attending a rally before an Emancipation Day March, in Vancouver, on Saturday, August 1, 2020. Emancipation Day marks the abolition of slavery in parts of the British Empire. The Slavery Abolition Act went into effect on August 1, 1834, after receiving Royal Assent nearly a year earlier. THE CANADIAN PRESS/Darryl Dyck

More than a year after Canada proclaimed Aug. 1 as Emancipation Day, Black leaders and scholars are renewing their calls for Ottawa to make a formal apology for the country's history of slavery and its intergenerational harms.

To ignore years of calls for a proper apology is “shameful,” she said.

“An apology would mean recognition of the fact that we were enslaved in this country,” Harding-Davis said in an interview. “It would also be an amelioration of the harsh treatment Black people have received and the validation that we have honestly contributed not only to this country, but to the making of this country.”

Emancipation Day recognizes the day in 1834 that the Slavery Abolition Act came into force, thus ending slavery in most British colonies including Canada, and freeing over 800,000 people. Thousands of slaves from Africa were brought against their will to Nova Scotia, New Brunswick, Prince Edward Island and Newfoundland, as well as to Lower Canada and Upper Canada, which is now Ontario.

In the colony of New France - which became British territory in the 1760s - the majority of slaves were Indigenous, historians say.

She said she doesn't feel most Canadians are even aware of the country's history of slavery.

“It's just been sidelined and brushed under the rug as much as possible,” she said. “This anti-racism movement that has happened â€¦ in the last10 years, but more focused since George Floyd's death in the United States, has only highlighted that there's a small awareness that there's anything wrong with the treatment of Black people in Canada.”

Dalhousie University history professor Afua Cooper said Sunday that she first asked Ottawa in 2007 to apologize for slavery and its harms. The principal investigator for the Black People's History of Canada project noted that in the meantime, other groups have received apologies for historical harms.

“There can't be any other explanation except that this is a specific form of anti-Black racism,” Cooper said in an interview. “Black people are not seen as fully-fledged citizens and it's the federal government's way of saying, 'Too bad.”'

Some will argue that an apology isn't warranted, she said, since Canada was formed in 1867, more than three decades after slavery ended. But Cooper said that reasoning doesn't hold up, adding that the country formed in 1867 was built from what it was in the years before.

“And OK, how about apologizing to the Black community for things that happened after 1867?” she asked, pointing to examples including segregation, and a 1911 proposal in government that sought to ban Black immigrants from entering the country.

The last segregated school in Canada - in Lincolnville, N.S. - didn't close until 1983.

Harding-Davis also doesn't buy that argument. Black people have been subject to marginalization because of laws and practices that allowed and came from slavery, she said.

“The mindset, the beliefs have been left in place,” she said. “We continue to face prejudice and discrimination and longtime disparities, and the government has really done little to nothing to change that.”

Nova Scotia Sen. Wanda Thomas Bernard said Sunday that it is “absolutely” time for a federal apology for the country's practice of enslaving Black people and its lasting harms, but she said an apology is empty without action.

The question she is asking Canada after last year's recognition of Emancipation Day is, “What's next?”

“We really need more engagement from everyone to move forward to walk this path in a more positive way. We need allies to be more impactful, more committed as they go forward, and not just performing allyship.”

The federal Department of Housing, Diversity and Inclusion did not immediately provide a comment upon request.