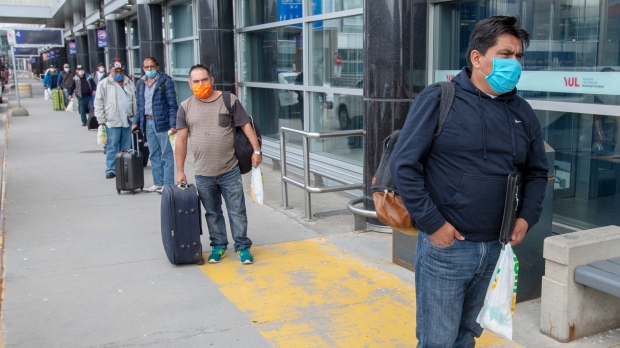 Migrant workers from Mexico maintain social distancing as they wait to be transported to Quebec farms after arriving at Trudeau Airport Tuesday April 14, 2020 in Montreal. THE CANADIAN PRESS/Ryan Remiorz

TORONTO - Migrant and undocumented workers must have access to the COVID-19 vaccine as part of Canada's immunization effort, advocates said Wednesday, calling on all levels of government to ensure the workers are guaranteed the shots.

The Migrant Rights Network, along with doctors and labour groups, voiced concerns that thousands of migrant and undocumented workers may not get the vaccine because of their immigration status.

“Concrete action is urgently necessary to ensure life-saving public health measures are accessible to all migrant and undocumented people,” said Syed Hussan, spokesman for the group.

An estimated 1.6 million people in Canada don't have permanent resident status and many work in essential jobs in health care, construction and agriculture, the group said.

While governments have said the vaccine rollout will be universal, the advocates made specific recommendations to ensure the workers receive the shot.

Granting workers permanent resident status would address the problem, but in the absence of that the group recommended vaccines be provided to the workers free of charge and without a health card required to obtain them.

Advocates also said the shot shouldn't be mandatory and health-care providers must train people providing the doses to ensure migrant or undocumented workers aren't turned away.

Dr. Danyaal Raza, chairman of Canadian Doctors for Medicare, said many undocumented workers are afraid to get the shot because they worry about having to provide identification.

“Many uninsured people with precarious status worry about being reported to the Canadian Border Services Agency to face detention or deportation,” he said.

“Some, as a result, may avoid receiving the vaccine altogether. We need to be able to assure those affected that their privacy will be respected.”

Pauline Worsfold, a registered nurse with the Canadian Federation of Nurses and chair of the Canadian Health Coalition, said migrant workers cannot be included as an “afterthought” in the country's vaccine rollout.

If Canada's goal is to eliminate COVID-19, as many people as possible must be vaccinated, she said.

“They must have access to universal health care immediately, regardless of their immigration status, and it should be private and confidential so that we can eliminate the COVID virus and the variants that are now spreading like wildfire,” she said.

A spokeswoman for the Public Health Agency of Canada said COVID-19 vaccines across the country are being administered for free.

“While they're available to priority populations first, they'll be available to everyone in Canada who is recommended to get the vaccine by federal, provincial and territorial public health authorities,” Anna Maddison said in a statement.

“This applies to everyone in Canada, including those who aren't citizens.”

Maddison said that each province is in charge of its own plan to administer the vaccine.

In Ontario - where thousands of migrant workers arrive to work on farms every spring - a spokesman for the Ministry of Health said the government's goal is to provide a shot to everyone who is eligible and wants a vaccine.

“When temporary workers get vaccinated depends on where they fall in the priority framework,” David Jenson said in a statement.