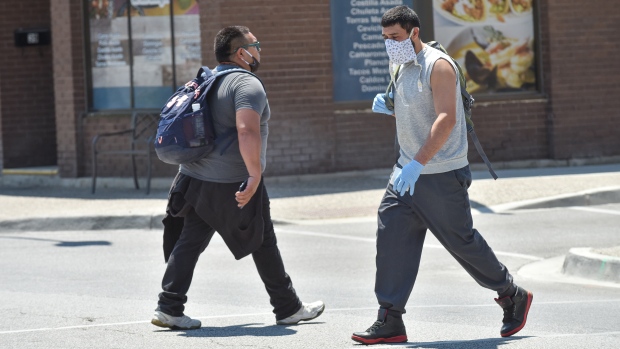 Migrant worker Omar Delgado Reyes, right (light grey shirt) of Mexico walks across Talbot St. in downtown Leamington, Ont., Tuesday, June 30, 2020 after doing some banking.The end of the month is pay day at many of the Leamington-area farms. THE CANADIAN PRESS/Rob Gurdebeke

TORONTO - Migrant care workers are increasingly being exploited during the COVID-19 pandemic, an advocacy group said Wednesday as it called on the federal government to bolster protections for the workers and grant them permanent resident status.

The Migrant Rights Network said a growing number of the workers who come from abroad to care for children, the sick and the elderly in employers' homes have reported issues like underpayment of wages, longer work hours and even evictions.

The group -- which has issued a report after surveying more than 200 of the workers -- said some also reported being restricted from leaving their employers' homes over fears of COVID-19.

Migrant care workers -- who are in the country on permits -- have little legal protection when dealing with such issues and need support from Ottawa, the group said.

“Restrictive immigration laws have produced conditions for exploitation and abuse that care workers are facing now and have faced for decades,” said Diana Da Silva, an organizer with Caregivers Action Centre, a member of Migrant Rights Network.

“These experiences are not new, but have been further exacerbated during COVID-19,” she said.

Some workers have seen their hours of work cut, which prevents them from accumulating the employment hours and pay required to apply for permanent residency, the group said.

“Permanent resident status is the single most important change that would ensure migrant care workers can protect themselves against labour exploitation,” the report said.

“(It) immediately gives workers the ability to leave a bad job and make a complaint without fear of reprisals.”

Harpreet Kaur, a migrant care worker who came to Canada from India in 2016, said in her first job in Edmonton she worked long hours each day and was paid between $600 and $700 a month. After leaving that job, it took her over a year to find another position that fulfilled strict immigration requirements.

The pandemic has now added another layer of worry, she said, with employers limiting or not permitting trips to get groceries, exercise, or send money home to family.

“During COVID-19 everyone is having a hard time,” she said. “Our employers don't want us to go outside because they are scared of COVID.”

Karen Sivatra, a migrant worker from the Philippines, said she came to Canada in 2016 to build a better future for her family. She said the long hours she worked providing child care became even longer during the pandemic.

Sivatra said she recently lost her job when her employer decided to move out of the Greater Toronto Area.

If the government granted workers permanent immigration status and changed work permits that are now tied to one employer it would help workers, she said.

“How can we support our families?” she said. “If we only had permanent residency, we could find a job easily.”

Not only should Canada change immigration rules to help them, but the government should also address the prolonged family separation created by the current system, she said.

“These care workers have come into Canada to take care of our children, our loved ones, our elderly people with disabilities, all in the meanwhile we're forcing them to separate from their own family members,” she said.

Kwan said the federal government has repeatedly said it will address the issues facing migrant care workers but has taken little action.

“It's high time that the Liberal government stopped saying that they value these workers and act like they really do and give them status on arrival,” she said.

Raquel Dancho, the Conservative immigration critic, said the pandemic has brought to the forefront a number of issues regarding the treatment of migrant workers.

“The stories outlined in the report are inexcusable,” she said in a statement. “Action must be taken to ensure that these abuses no longer take place in Canada.”

A spokesman for Immigration Minister Marco Mendicino said the pandemic has exposed “unacceptable gaps” in the Temporary Foreign Worker Program which the government will fix.

“As the Prime Minister said, we need to reimagine our Temporary Foreign Worker program and how we can better protect workers - and that includes considering new pathways to permanent residence,” Alexander Cohen said in a statement.

This report by The Canadian Press was first published October 28, 2020.