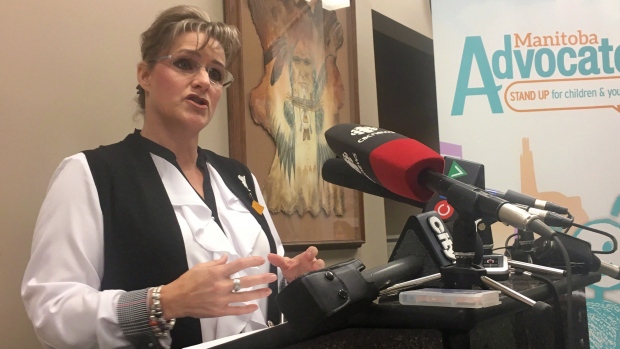 Manitoba Advocate For Children And Youth Daphne Penrose addresses a news conference in Winnipeg, Friday, Oct.19, 2018. Manitoba Child Advocate Daphne Penrose says the additional stress on families during the pandemic coupled with fewer eyes on kids and less access to services that can help them cope is a "perfect storm" making her afraid many kids are suffering. THE CANADIAN PRESS/Steve Lambert

OTTAWA -- Reports to authorities about suspected child abuse or neglect are down as much as 40 per cent in some regions but child advocates say it's not because fewer kids are at risk.

Daphne Penrose, Manitoba's advocate for children and youth, said the anxiety, financial toll and physical stresses imposed by the pandemic's stay-at-home orders, means families need more help than ever from a system that is less able to provide it.

"It does appear to be almost the perfect storm," said Penrose, who is the watchdog and advocate for child and family services in Manitoba.

Sara Austin, the founder and CEO of Children First Canada, said they have seen reports of child abuse to authorities across Canada fall between 30 and 40 per cent since the crisis began in mid-March. She said there was a small spike in reports in the first few days but since then, the numbers have gone down everywhere.

"We don't have any reason to believe child abuse is going down. It's that those who are trusted adults in the lives of children no longer see them."

Austin said when schools are open, teachers usually account for nearly one-third of all reports of suspected abuse to authorities. It's not just teachers who are absent from kids' lives these days. Doctors are seeing fewer patients, often only for emergencies. Daycare workers, after-school activity co-ordinators, religious leaders, even grandparents, friends and neighbours -- all part of the "safety net" for kids -- are being forced to limit contact.

Penrose said the services that families under stress often turn to, such as child welfare agencies, mental health supports, and respite workers, also are less able to help, with their own staff restricted by physical distancing rules.

"When families can't access the services they need, they get into crisis," she said.

Evidence of the stress on kids is seen by the higher demand for services from Kids Help Phone, the charity that offers phone and text support to kids who need support. In March, the organization reported a 350 per cent increase in texts for help from youth.

The federal government injected another $7.5 million to Kids Help Phone to try and aid its efforts to respond. Austin said Ottawa needs to do more to co-ordinate a national approach to child safety efforts.

Austin said her organization is also encouraging provincial education ministers to ensure teachers are doing what they can to maintain contact with kids, particularly the ones they may have been concerned about before this started.

The risk to kids is exacerbated by a jump in online activities for kids, many of whom are now on the internet for school. The Internet Child Exploitation unit of the Alberta Law Enforcement Response Team reported this week that investigative referrals for online child exploitation were more than double the normal number in March. The unit receives most of its referrals from the RCMP, which works with internet service providers and social media sites to track suspected exploitation online.

On Monday, the team said it had received 243 reports of online child exploitation in Alberta. The monthly average over the last two years is about 110 reports.

Austin said anybody who has any concern about a child's well-being should not be afraid to report it.