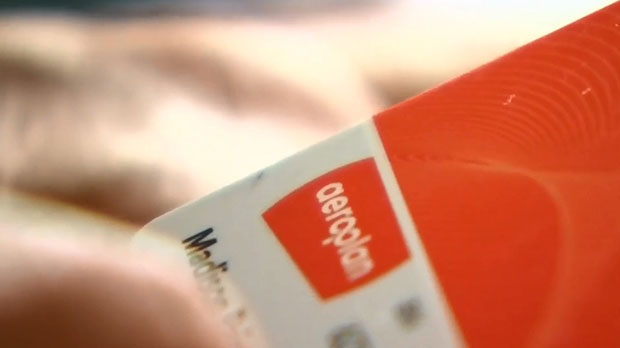 An Aeroplan card is seen in this file image.

MONTREAL -- Shares of Aimia Inc. surged as much as 44 per cent after a group led by Air Canada made an unsolicited offer to buy its Aeroplan loyalty business in a deal valued at $2.25 billion, including points liabilities they would assume.

The consortium said Wednesday the proposed transaction would provide continuity for Aeroplan members as well as customers of the Montreal-based airline, Toronto-Dominion Bank, Canadian Imperial Bank of Commerce and Visa Canada - which all have long-standing relationships with Aimia.

“If completed, the proposed transaction would result in a positive outcome for Aimia shareholders and Aeroplan members, allowing for a smooth transition of Aeroplan members' points to Air Canada's new loyalty program launching in 2020, safeguarding their points and providing convenience and value for millions of Canadians,” the group said in a statement on Wednesday.

It wasn't immediately clear whether Aimia's board would recommend the offer, which the consortium said was worth the equivalent of $3.64 per share. The group said the offer would expire Aug. 2 but such deadlines are often amended.

Aimia stock rose as much 44 per cent to $3.60 in late morning trading on the Toronto Stock Exchange after the consortium's announcement. Shares had slipped to $3.42 by around noon.

Under the proposal, a corporation to be formed by the consortium would acquire Aimia's loyalty business, including roughly $2 billion worth of Aeroplan points obligations as of March 31, 2018, for $250 million in cash. The total purchase price, in turn, is valued at approximately $2.25 billion.

The future of Aeroplan, which has more than five million members, has been in doubt since Air Canada announced in May 2017 that it planned to launch its own loyalty rewards plan in 2020.

Over the past 14 months, Aimia's stock had fallen to $2.50 as of the close on Tuesday, down from $8.84 prior to Air Canada's departure announcement.

The consortium's proposed transaction surprised analysts, given Air Canada's plans for its own platform.

“Air Canada's offer may be difficult to accept for Aimia's management given that Air Canada had abruptly decided not to renew its contract with Aeroplan last year causing havoc in Aimia's share price,” said Martin Landry, an analyst with GMP Securities.

Given the magnitude of the transaction, it will likely require a vote from Aimia shareholders, he said in a note to clients.

“We believe they will be tempted to accept Air Canada's offer despite the sour taste it may leave with some shareholders,” Landry said.

The “smooth transition” for Aeroplan members to the new program would also ensure significant initial uptake for Air Canada's own program when it begins in mid-2020, Taylor adds.

“While it is tough to handicap the financial impact of the values being discussed, having the much larger and well-funded financial services partners coming along with the deal certainly helps spread the assumed liability around,” Taylor said. “Additionally, Air Canada will likely have more control on how the liability is serviced vs. the prior agreement with Aimia.”

Developing a loyalty program as sophisticated as Aeroplan is a challenge, and the consortium's move to buy it instead is not surprising, said Louis Hebert, a professor at the department of management at HEC Montreal.

“It seems that Air Canada came to the conclusion that it was simpler to buy it and enjoy a program that works well and has a good reputation,” he said.

Air Canada created Aeroplan as in-house loyalty program but it was spun off as an independent business as part of a court-supervised restructuring of Canada's largest airline. At the time, CIBC was Aeroplan's main bank partner.

Since 2014, TD has been Aeroplan's main Visa card partner although CIBC continues to offer Aeroplan cards rewards points that can be redeemed for Air Canada flights and other merchandise.

For the banks, the primary motivation behind this bid is “defensive in nature,” said Gabriel Dechaine, an analyst with National Bank.

“Credit cards are one of the highest return businesses the banks have, and the Aeroplan portfolio is a high quality one,” he said in a note. “We estimate it generates combined profitability well in excess of $400 million for the two banks.”

The banks likely wanted to avoid “annoying their customers” with another transition to a different loyalty program, which “could have made them vulnerable to being picked off by competitors,” he added.