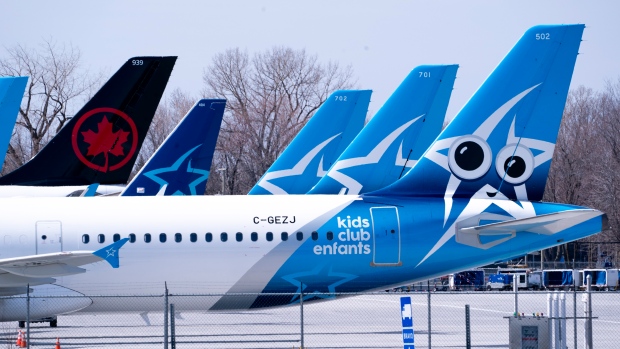 Tails of Air Transat and an Air Canada aircraft are seen on the tarmac at Montreal-Trudeau International Airport, in Montreal, Wednesday, April 8, 2020. THE CANADIAN PRESS/Paul Chiasson

MONTREAL - Air Canada is still looking to take Transat AT under its wing despite the COVID-19 pandemic that has rocked the airline industry, but it will pay far less than originally expected.

The two companies announced Saturday they'd agreed on revised terms that would see Air Canada pay $5 a share for the parent company of Air Transat, compared to the $18 per share originally pledged in its takeover bid.

That brings the total price of the takeover to $190 million, down from $720 million previously.

“This is the worst crisis since the founding of Transat 33 years ago, and with a second wave of the pandemic underway, the timing of an eventual recovery remains uncertain,” Transat President and CEO Jean-Marc Eustache said in a statement.

“More than ever, having a national airline with the scale to weather current industry turbulence, which is expected to continue for several years, is in the best interests of our shareholders, customers, employees and other stakeholders.”

The deal is endorsed by Transat's board of directors and would allow shareholders to be paid in either cash or Air Canada shares.

It must be approved by two-thirds Transat's shareholders, who will vote in an extraordinary assembly in early December. On Saturday, the company did not indicate whether its major shareholders, which include Letko Brosseau, the Fonds de solidarite FTQ and Quebec's pension fund manger, the Caisse de Depot, supported the deal.

The deal takes place under a vastly different set of circumstances than were in place when the shareholders of the Quebec-based tour operator voted in favour of the previous deal in 2019. The pandemic has grounded flights, while 14-day quarantine restrictions remain in place for anyone arriving in Canada internationally.

Air Canada said in a news release that the pandemic has had a devastating effect on the aviation industry and the value of airlines and their assets, but it still wants to proceed with the acquisition “at a reduced price and on modified terms.”

“This combination will provide stability for Transat's operations and its stakeholders and will position Air Canada, and indeed the Canadian aviation industry, to emerge more strongly as we enter the post-COVID-19 world,” Air Canada President and CEO Calin Rovinescu said in a statement.

Before the pandemic, the transaction would have allowed the group to hold a 60 per cent share of the transatlantic market from Canada. Air Canada and Transat AT would overlap on certain sun destinations in addition to having a grip on air travel in Montreal.

The deal could be concluded in early 2021 if it is approved by Transat AT shareholders and regulators in Canada and the European Union. The deadline to secure the regulatory approvals has been pushed from late December to Feb. 15.

The European Commission's antitrust body, which is investigating the proposed merger, has not indicated whether it would give the green light.

Air Canada also approved $250 million in increased borrowing by Transat pending the completion of the merger.

The $5-per-share purchase price represents a 31.6 per cent premium over the stock's 20-day weighed average. Transat AT shares closed at $3.83 on Friday.

The agreed-upon price is one that is reasonable for both parties, according to Karl Moore, a professor in McGill University's Desautels Faculty of Management, who said the deal would never have closed at the original $18 share price.

“We can no longer refer to the conditions that prevailed before the health crisis,” Moore said in a phone interview.

“The aviation industry is in the darkest period in its history.”