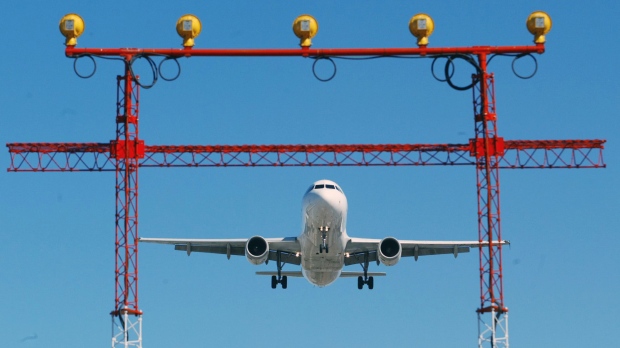 An Air Canada jet prepares to land at Pearson International Airport in Toronto on September 30, 2004. THE CANADIAN PRESS/Adrian Wyld

MONTREAL - Air Canada is halting all direct flights to China following the federal government's advisory to avoid non-essential travel to the country due to the coronavirus epidemic.

The abrupt suspension - effective Thursday and slated to last until Feb. 29 - threatens to dent revenues as the airline scrambles to regroup amid the disruption.

“It definitely will have a commercial impact. There's no doubt about it. China is a major market for Air Canada,” said John Gradek, a lecturer at McGill University and head of its Global Aviation Leadership Program.

Canada's largest airline, the carrier makes 33 flights a week to Beijing and Shanghai from Vancouver, Toronto and Montreal. The potential for longer-term harm looms if travel demand stays near ground level into the spring.

More than 50 million people in 17 cities are now under under lockdown as China rolls out quarantine measures unprecedented in modern history.

Air Canada said Wednesday it had begun to cancel select flights as customers delayed trips and called off travel plans due to fears of the spreading epidemic.

“Three or four hours later, everything shut down,” Gradek said. “It kind of shows you the degree to which this is a very, very fluid situation.”

Affected customers will be notified and offered options that include travel on other carriers where available, or a full refund, Air Canada said.

The carrier is also waiving rebooking fees for flights that go through a partner airline to the Chinese city of Wuhan, the epicentre of the virus, until March 29.

Canada has looked increasingly to East Asia as a growth market, with the number of annual visitors to Canada from China shooting up by a factor of 10 since 2000 to 757,000 in 2018.

Air Canada has seen its shares fall by about 10 per cent since authorities on Jan. 20 confirmed human-to-human transmission of the illness, which has caused 132 deaths and infected more than 6,000 people.

The Montreal-based carrier said in a statement that it remains in consultation with the Public Health Agency of Canada, Transport Canada, and Global Affairs and will adjust its schedule as appropriate.

“Air Canada regrets this situation and apologizes for the serious disruption to our customers' travel plans.”

China Southern Airlines and China Eastern Airlines, which fly into Vancouver, Toronto and Montreal, have not announced plans to halt flights to Canada.

The novel coronavirus has killed 132 people and infected more than 6,000 on the Chinese mainland and abroad.

Foreign Affairs Minister Francois-Philippe Champagne says Canada has a plane preparing to fly Canadians out of the province in China at the centre of an outbreak of a new coronavirus.