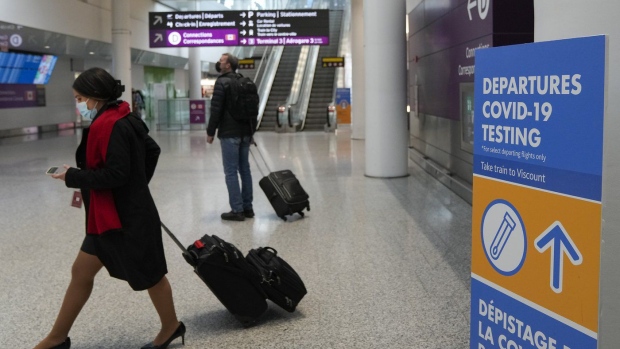 MONTREAL - Flight attendants are effectively forced to work for free amid growing tarmac delays - particularly at Toronto's Pearson airport - according to the employees' biggest union.

The Canadian Union of Public Employees, which represents some 15,000 flight attendants, says the clogged airports and lengthy wait times that have plagued thousands of passengers in recent weeks are also extracting what amounts to unpaid labour from cabin crews.

Flight attendants are typically compensated based on time in the air, so hours spent on the tarmac tending to frustrated travellers yields no extra wages in some cases, while other collective agreements allow for half pay. The problem, most acute at Canada's largest airport since late last month, plays out after planes land and then sit for up to three hours at the gate, said Wesley Lesosky, who heads CUPE's airline division.

“They're actively doing water service, helping people. The cabins are getting hot, because obviously they're on the ground ... they can be tending to ensuring the aisles are clear, doorways are clear,” he said in a phone interview from Victoria.

“For Air Canada Rouge, there's zero pay, zero compensation for them. For Air Canada, it's a 50 per cent credit if the service director claims it.”

The on-the-ground work can be even more taxing - and occasionally abusive - than service in the sky, he added.

“We've definitely seen a huge increase in irate customers, and just health and safety issues in general for cabin crew.”

“If flights are routinely delayed and crews are unable to meet their minimum crew rest then a cascading effect happens where subsequent flights are delayed, not only because the plane is arriving late, but because crews must have a minimum number of hours to rest after a full duty day.”

Even half-time pay for tarmac delays could also wind up costing carriers a bundle, he added.

Lesosky says airlines and federal agencies need to hire more staff to improve the flow of passengers and that an “outdated” system of compensation must be reformed.

Airports, particularly in Toronto and Vancouver, have seen hours-long security queues, customs bottlenecks and other delays due to random COVID-19 testing as passengers return to the skies en masse following more than two years of pent-up demand.

On Wednesday, Transport Minister Omar Alghabra said Canada's airport security agency is increasing its staffing, but that a lack of workers is not the main culprit for the unacceptable processing lags - an assessment the sector disagrees with.

The WestJet Group is hoping to see the issue resolved through action by government agencies.

“WestJet is extremely concerned with the state of services provided by government agencies at our air borders and security screening points,” spokeswoman Madison Kruger said in an email.

Along with the Greater Toronto Airports Authority, the carrier is calling for fewer “legacy public health requirements,” including an end to random testing upon arrival for international passengers, which takes up time and terminal space.

Air Canada did not respond immediately to questions from The Canadian Press.