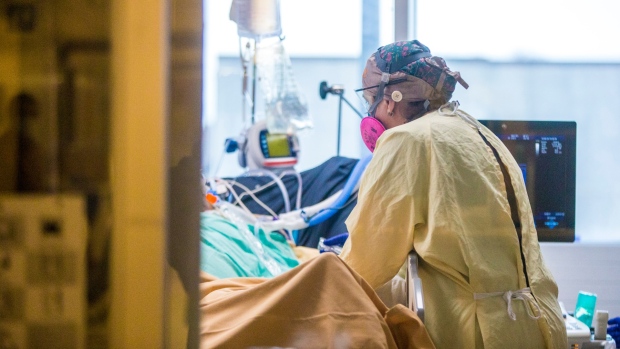 Health officials in Alberta and Manitoba warned Monday that they were reaching new peaks for intensive care admissions, even as more stable case counts and expanded vaccine rollouts buoyed hopes in other provinces.

Alberta Premier Jason Kenney said the province's intensive care units were currently treating more than 240 patients, surpassing all previous records. Of those patients, 186 have tested positive for COVID-19, he said.

“Many of these are people who are sedated because they're on respirators, unable to breathe on their own and who cannot have any human contact except through layers of (personal protective equipment),” he told a news conference.

Dr. Verna Yiu, president and chief executive officer of Alberta Health Services, said capacity would have been surpassed had the province not opened an additional 106 ICU beds on top of its pre-pandemic capacity of about 170.

Kenney said many of the highest hospitalization rates were in rural areas, proving that COVID-19 isn't just a “big-city problem.” The premier said that while the province's new COVID-19 case numbers have stabilized, he expects hospitalizations to continue to rise for the next week or so as more ill Albertans enter the system.

Despite the dire warnings, Kenney said he still hopes to ease public health restrictions soon, once vaccination rates climb and hospitalizations drop. He urged Albertans to encourage their families and friends to get the shot, describing vaccines as “our way to get back to normal.”

It was a similar story in Manitoba, where health officials reported 120 patients in intensive care beds across the province, including more than 70 with COVID-19.

“We don't know if we're at the peak yet and how long that's going to be, but as we continue to see 400, 500 cases, we know that's going to have an impact on the acute-care system,” she told reporters.

She said the province has had to scale back non-urgent and elective surgeries in order to meet the needs of fighting COVID-19. However, Sirgusa said the province was not yet at the point of having to ration care and would look at “all other available options” before invoking a triage protocol.

Several provinces were further expanding their vaccine rollouts on Monday as they continued the push to vaccinate their adult populations.

Ontario was originally scheduled to lower vaccine access to people as young as 30 but instead said Monday that all adults in the province can book an appointment starting Tuesday. The government said it would stop sending half its doses to COVID-19 hot spots, where those 18 and up have been eligible to get vaccinated, and will instead distribute vaccines across the province on a per-capita basis.

While the move was criticized by members of the opposition and some mayors, who said the province should keep focusing on hard-hit areas, Health Minister Christine Elliott said there would be enough shots to meet demand.

She added that local health officials would be able to direct doses to where they were most needed, including hot spots. “We have large quantities of vaccines coming in, so I feel confident that the local medical officers of health will know the areas within their regions that they need to continue to target,” she said.

Ontario's vaccine expansion is possible because of an early delivery of 1.4 million doses to Canada from manufacturer Pfizer-BioNTech.

Quebec opened a drive-in vaccine clinic at Montreal-Trudeau International Airport on Monday and announced it was sending musicians to play at some vaccine centres as an incentive to get people to receive the shot.

Health officials in Quebec reported 551 new COVID-19 infections, which was the lowest daily number of new cases since September.

Health Minister Christian Dube said Sunday that the province was just 85,000 appointments shy of meeting its goal of having 75 per cent of adults with at least one dose of vaccine or an appointment booked to get one.

Yukon announced it has reached a 76 per cent vaccination rate for eligible adults for a single dose and it isn't far behind for the second dose.

The territory said 26,242 people have had their first dose and 23,236 have had their second shots, and clinics for those aged 12 to 17 will begin soon.

Nova Scotia opened COVID-19 vaccine appointments to people 30 and older on Monday, and health officials said they hoped to lower that age to 12 by next week.

Everyone over 18 in British Columbia is now eligible to book an appointment. Provincial health officer Dr. Bonnie Henry said she would also have more information later this week on how those 12 to17 years old can get their shots.

With files from Steve Lambert and Holly McKenzie-Sutter.