Alberta declares state of emergency due to Fort McMurray wildfire

FORT MCMURRAY, Alta. -- Alberta declared a state of emergency Wednesday as crews frantically held back wind-whipped wildfires that have already torched 1,600 homes and other buildings in Fort McMurray, forcing all 80,000 residents to flee.

"The situation in Fort McMurray is not stable. It is unstable," Scott Long of Alberta Emergency Management told reporters in a Wednesday afternoon briefing.

"The downtown core is being held through some Herculean efforts of the structural firefighters in the area."

An update from the Rural Municipality of Wood Buffalo later in the evening indicated the fire was continuing to claim homes and had destroyed a new school that was being built in the neighbourhood of North Parsons.

Municipal Affairs Minister Danielle Larivee said the state of emergency allows the province to take full control of the situation, conscript people if necessary, and bulldoze structures as required.

"We are still in the throes of an intense crisis," said Larivee.

There were dangerous and dramatic developments on multiple fronts Wednesday in a story that has made headlines worldwide with stunning video footage of trucks and cars driving past sheer walls of flame.

There were haunting images of scorched trucks, charred homes and telephone poles, burned out from the bottom up, hanging in the wires like little wooden crosses.

Alberta Premier Rachel Notley flew up to survey the situation first-hand, while officials in the evacuation centre had to bolt to the south of the city as flames edged closer.

Notley tweeted pictures of the fire from above. "The view from the air is heartbreaking," she wrote.

"We saw areas where there was a tremendous amount of smoke," she said later at a relief centre for evacuees in Anzac. "We were way up in a helicopter and the plumes of smoke were higher than we were."

Notley said the state of emergency will also ensure that the federal government pays part of the costs of the wildfire.

The blaze effectively cut Fort McMurray in two late Tuesday, forcing about 10,000 north to the safety of oilsands work camps.

The other 70,000 were sent streaming south in a bumper-to-bumper snake line of cars and trucks that stretched beyond the horizon down Highway 63. Some vehicles sat in ditches, the victims of engine trouble or a lack of gas.

The situation took a tragic twist Wednesday when an SUV collided head on with a tractor-trailer on another southern escape road, Highway 881, killing two and shutting down the road in both directions. The northbound lane reopened later in the evening.

The displaced arrived in the communities of Anzac, Lac La Biche and Edmonton. Some were going as far as Calgary.

At Anzac, volunteers served eggs and pancakes to some of the 2,500 people at the recreation centre.

Chantelle Boutin said she was grateful that she and her husband found a safe refuge. The couple brought their two dogs, but one of them died from the stress.

"We lost our house, we lost everything, but we didn't lose our spirit," said Boutin.

"Thank you, God, nobody died. Our prayers are with you guys, those firefighters, EMS."

Crews had been battling the blaze since Sunday.

But the situation turned destructive within minutes on Tuesday afternoon when the blaze, whipped up by winds, roared into the southwest corner of the city.

It engulfed homes in three subdivisions and destroyed vehicles, gas stations and a motel. Most of the homes in the neighbourhoods of Beacon Hill and Waterways were destroyed.

There have been no reports of fire-related injuries or deaths.

The wildfire was still listed out of control as it curled around the city, 435 kilometres northeast of Edmonton, and was expected to reach 100 square kilometres by day's end.

Robin Smith with the Regional Municipality of Wood Buffalo, which includes the city, said it was believed everyone left Fort McMurray.

"We have RCMP patrols that are regularly looping the neighbourhoods to make sure there's no one straggling," said Smith.

Mayor Melissa Blake said her city is strong and remembers Slave Lake, a community devastated by wildfires in 2011.

"We will hope to follow in the shadow of Slave Lake in our perseverance and resolve," said Blake.

"And as we look to the future, this is still a place of incredible strength, resiliency and vibrancy."

On Wednesday evening, the Rural Municipality of Wood Buffalo tweeted that firefighting efforts had saved the water treatment plant for the area. At the same time, Alberta Health Services issued a release saying that Fort McMurray was under a boil-water order.

The province said 255 firefighters were on scene, backed up by 12 helicopters and 17 air tankers. The military has provided rescue helicopters and 15 residents who had been cut off by fire were airlifted to safety, Long said.

Concerns and best wishes poured in from around the world.

From Britain, the Queen said in a statement: "Prince Philip and I were shocked and saddened by the news of the wildfires that are causing such devastation to Fort McMurray.

"Our thoughts and prayers are with all those who have been affected." 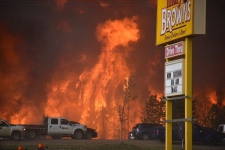 A wall of fire rages outside of Fort McMurray, Alta. Tuesday May 3, 2016. Raging forest fires whipped up by shifting winds sliced through the middle of the remote oilsands hub city of Fort McMurray Tuesday, sending tens of thousands fleeing in both directions and prompting the evacuation of the entire city. THE CANADIAN PRESS/HO-CBC-Terry Reith