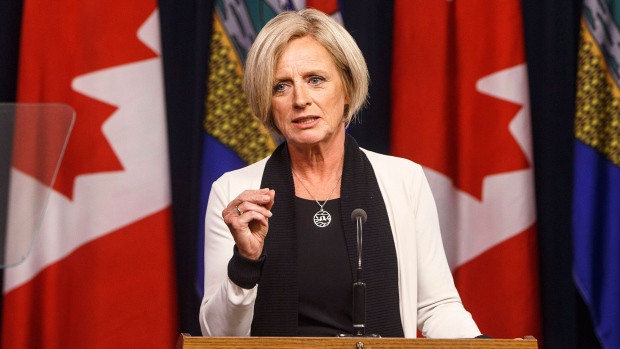 EDMONTON -- Premier Rachel Notley is ordering a mandatory cut to oil production to deal with a price crisis she says threatens to gut Alberta's bedrock industry.

Notley announced the province will impose across-the-board cuts amounting to 8.7 per cent of output to reduce a growing glut of oil that is forcing Alberta oil to sell at steep discounts compared with the North American benchmark.

"In the last few weeks, this price gap has reached historic highs," Notley said Sunday in a speech timed to run live on supper-hour newscasts in Alberta.

Roughly speaking, Notley said, while the rest of the world sells its oil at about $50 per barrel, Alberta fetches only $10.

"We are essentially giving our oil away for free."

Fire-sale prices have led to concerns the oilpatch will have to find savings elsewhere in the coming weeks and months by slashing capital spending or jobs.

Notley said the 8.7 per cent reduction begins in January, with the expectation that figure will gradually decrease until the cuts are scheduled to end on Dec. 31, 2019.

"This is a short term measure," she said.

Output of raw crude oil and bitumen will be reduced initially by 325,000 barrels per day. As the excess storage clears, the reduction is expected to drop to 95,000 barrels a day.

There will be a 10,000-barrel-per-day exemption to ensure small producers are not hurt disproportionately. The province estimates 25 producers will have to impose cuts.

About 35 million barrels of oil are in storage -- about twice the normal levels.

The announcement is expected to narrow the differential by at least $4 per barrel and add an estimated $1.1 billion to government revenues in 2019-2020.

The current glut is due in part to pipeline bottlenecks.

The Trans-Mountain line to the B.C. coast is now in legal limbo despite being approved two years ago.

The Enbridge Line 3 project, shipping more oil from Alberta to the U.S. Midwest is expected to come online late next year.

The premier has already said the province will buy as many as 80 locomotives and 7,000 rail tankers -- expected to cost hundreds of millions of dollars -- to move the province's excess oil to markets, with the first shipments expected in late 2019.

The Opposition United Conservatives and the centrist Alberta Party had already called for the production cut. Notley thanked them both in her speech.

But he said Notley's government has played a role in creating the problem by not pushing back as the federal government cancelled the Northern Gateway pipeline to B.C. and introduced legislation that industry leaders say will make it more difficult to get oil megaprojects approved.

"Many of these policies (were) supported either by acquiescence or actively by the NDP government," said Kenney. "That's one of the reasons why in the past week we've been giving away our oil."

Alberta Party Leader Stephen Mandel said the government was warned in the spring that this crisis was coming, and should have acted sooner.

"They dragged their feet. They had an opportunity early to do something and they didn't," said Mandel.

"It's frustrating to me to see so many people losing their jobs as a result of this incompetence."

Industry feelings prior to the announcement had been mixed.