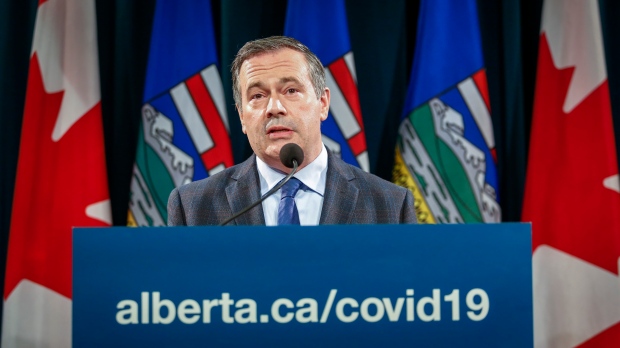 Alberta Premier Jason Kenney, facing a COVID-19 crisis that is collapsing the province's health-care system, says his government will implement a vaccine passport.

Kenney also declared Wednesday a state of public health emergency, with strict new limits on gatherings, and warned the province is at risk of exhausting intensive care beds and staff within 10 days.

Kenney said he was reluctant to approve what he called the “restriction exemption program.”

“With unvaccinated patients overwhelming now our hospitals, this is now the only responsible choice that we have,” he said.

Several provinces are bringing in vaccine passports, which compel people to prove they have been vaccinated before being allowed to use non-essential services such as pubs and restaurants.

Kenney had resisted such measures for health privacy reasons. But critics said he did so for political reasons to prevent a revolt by anti-restriction members of his United Conservative caucus.

Kenney apologized Wednesday and said lifting the restrictions was the wrong call.

“The government's first obligation must be to avoid large numbers of preventable deaths. We must deal with the reality we are facing. We cannot wish it away.”

Alberta has more than 18,000 active cases - the most of any province. On Wednesday, there were 877 people in hospital with the illness, including 218 in intensive care.