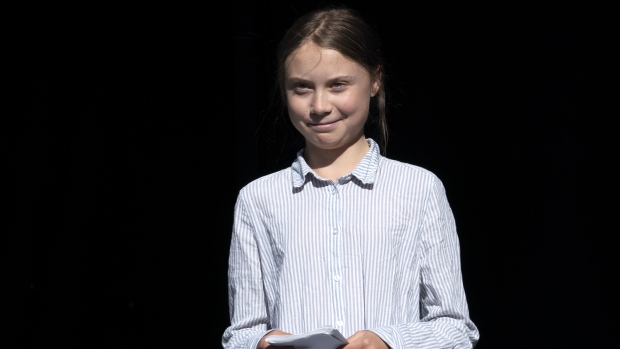 Swedish activist and student Greta Thunberg walks off the stage after addressing the Climate Strike in Montreal on Friday, Sept. 27, 2019. A group of Alberta oil and gas supporters are planning a counter-rally when Swedish climate activist Thunberg is to be at the legislature.THE CANADIAN PRESS/Paul Chiasson

EDMONTON - A group of Alberta oil and gas supporters is planning a counter-rally Friday as Swedish teen activist Greta Thunberg brings her fight for a greener future to the home province of Canada's energy industry.

Glen Carritt, who organized the United We Roll convoy that travelled to Ottawa in February, said a similar convoy will start in Red Deer, about 150 kilometres south of Edmonton, in the morning.

He said trucks are expected to arrive at the legislature in the Alberta capital at noon, when a climate rally is to begin with Thunberg.

“We don't need anymore celebrities coming here to tell us how to run our business,” Carritt said, referring to actors Leonardo DiCaprio and Jane Fonda, who have criticized the oilsands development in the region.

“We're very frustrated and we're frustrated at the fact that we still don't have pipelines in the ground and we continue to buy foreign oil.”

The counter-rally is meant to be peaceful and show the pride of Alberta's oil and gas sector, Carritt added.

“We just don't need anymore of these people coming in and telling us about our environmental standards when they don't really know and understand it,” he said.

“I'm all for educating, if they'd like to learn about it. I'd love to sit down with (Thunberg) and ask her if she knows about ... all the environmental standards that a small company and big corporations have to go through just to work in the oil industry.”

Thunberg, who is currently touring North America, has been making international headlines for accusing world leaders of letting down youth by doing little to tackle climate change.

The 16-year-old Stockholm student was in Montreal last month to take part in a global march for climate action, where hundreds of thousands of people attended.

Thunberg also met privately that day with Prime Minister Justin Trudeau, and she told him the same thing she tells all world leaders: they are not doing nearly enough and need to listen to the science.

But in Alberta, Thunberg will find herself in the middle of polarizing debate - how to prosper from the present-day carbon economy while preparing for a greener, low-carbon future.

United Conservative Premier Jason Kenney has said he hopes Thunberg recognizes efforts made by Alberta's oil and gas industry to reduce its emissions.

He also said he hopes she's warmly welcomed in Edmonton, but he had no plans to meet with her.

Energy Minister Sonya Savage said that Thunberg is welcome in Alberta, but understands why some in the province might be worried about her visit.

“We're in a jobs crisis in Alberta, so Albertans are understandably concerned when they see their energy sector under attack,” Savage said Thursday. “But Albertans are very welcoming, hospitable and open. So we welcome anyone.”

A lot of the counter-rallies have been come from a place of fear, said Stephen Buhler of Climate Justice Edmonton, one of the groups organizing the protest with Thunberg.

“It can definitely be terrifying when somebody is threatening your job the way that they feel that Greta and other climate activists probably are,” said Buhler, who works as a machinist for a company that provides equipment to the oil and gas industry.

“What we're calling for is not an end to their jobs, but a transition away from an oil and gas economy and transitioning into a zero-carbon economy that supports workers and makes sure that no one is left behind.”

Opposition NDP Leader Rachel Notley has said members of her caucus were at last month's climate rally at the legislature and it's possible they will also be there Friday.

Notley posted a letter Thursday on Twitter commending Thunberg for her advocacy and inviting the teen to meet with her.

“I know that there are issues which we may not agree, but I believe we share a commitment to acting to address climate change,” the former premier wrote.

Edmonton Mayor Don Iveson and Calgary Mayor Naheed Nenshi have both said they would meet with Thunberg to discuss their climate initiatives. The teen arrived in Calgary on Wednesday, but Nenshi said he did not get the chance to meet with her.

Cheryl Oxford, a spokeswoman for the Edmonton mayor, said in an email that Thunberg has not yet responded his invite.

Meanwhile, the City of Edmonton said it was working with police to ensure public safety and minimize disruptions.

“Traffic congestion in the downtown core is expected, and will affect transit service,” the city said in a statement. “Citizens are encouraged to take alternate routes if possible.”

This report by The Canadian Press was originally published on Oct. 17, 2019.