All of Ontario now in Stage 2 of reopening: Ford 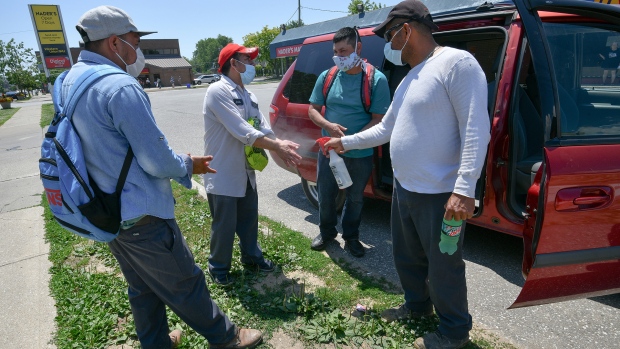 Mexican migrant workers, left to right, Jeremias Cruz, Antonio Dias and Adolfo Gonzalez have their hands sanitized by Juan Silva after the four finished up their month-end banking in Leamington, Ont. on Tuesday, June 30, 2020. THE CANADIAN PRESS/Rob Gurdebeke

Every community in Ontario will now soon be in Stage 2 of the province’s reopening plan after Premier Doug Ford said the agricultural towns of Leamington and Kingsville Ont. could join.

Starting Tuesday at 12:01 a.m., residents in both towns will be able to enjoy outdoor patio dining, swimming in outdoor pools, and personal services such as haircuts.

All other regions of the province moved into Stage 2 in waves over June, but Kingsville and Leamington were held back by the province after several major outbreaks of novel coronavirus infection among the area’s large migrant farm worker population.

“Outbreaks in the community have been contained, community transmission is low and we have the resources for testing and contact tracing,” Ford said Monday. “I want to thank the mayors and all the great people of Leamington and Kingsville for working with us in this period.”

In the past two days, the Windsor-Essex Public Health Unit which covers both towns has reported 31 new COVID-19 cases.

On June 29, officials reported 177 cases from the region in a single day, due to a major outbreak at an agricultural producer.

Ford said that in honour of the last communities in the province being allowed to indulge in services such as haircuts, he’d come down and get one of his own.

“I am coming down to pay you folks a visit, I am in desperate need of a haircut so I am going to be down there – let’s pick a barber somewhere in Leamington and Kingsville and I just can’t wait to come down and thank the people personally.”