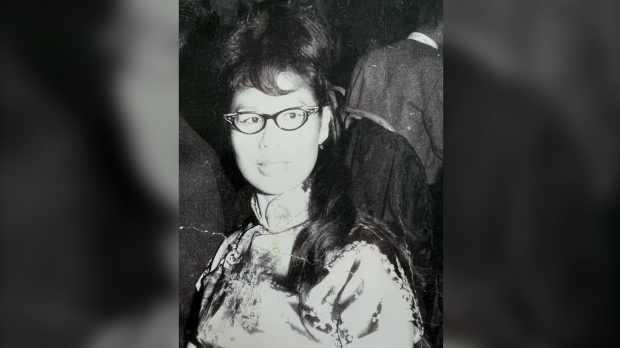 Shirley Ann Soosay, from Samson Cree Nation, Alta., is seen in an undated handout photo. Soosay's remains were buried in a California cemetery in 1980. On Friday, they are expected to return to her community about 43 years after she was last heard from. THE CANADIAN PRESS/HO-Violet Soosay

The pursuit took her to parts of Alberta and B.C. and down paths of uncertainty as weeks, months and years passed without word of Shirley Ann Soosay.

On Friday, about 43 years after she was last heard from, the body of Shirley Ann Soosay is expected to be returned to her home community of Samson Cree Nation, south of Edmonton.

Her remains had been buried in a California cemetery in 1980 under the name Kern County Jane Doe. Last spring, the county sheriff's office identified the remains as belonging to 35-year-old Soosay.

Violet Soosay has worked since then with the county coroner's office and the California cemetery to transport the body back to Alberta.

The website for the American non-profit group DNA Doe Project says the Jane Doe's body was found in an almond orchard near Bakersfield, Calif., in July 1980. She had been sexually assaulted and stabbed.

Wilson Chouest was convicted of killing the Jane Doe, along with another unidentified woman in 2018.

Violet Soosay said she last saw her aunt in 1977 at a family funeral. She remembers her as caring, supportive and a free spirit.

"That was my constant memory that I kept because it gave me that sense of connection," she said.

Shirley Ann Soosay was close with her mother and had maintained regular  contact with her, whether it was through holiday cards or letters, said Violet Soosay. The last correspondence came in 1979.

"After that, she just disappeared. Nobody knew. My grandmother was very frantic and heartbroken. She knew something happened."

A few years later, Violet Soosay said she promised her grandmother she would bring Shirley Ann Soosay home. Her grandmother died in 1991.

In early 2020, Violet Soosay said she came across an artist's rendering of the Jane Doe on a Facebook post from the DNA Doe Project. She believed the woman was her aunt.

The volunteer organization formed in 2017 to help identify unidentified deceased persons using forensic genealogy. The Kern County Sheriff-Coroner Division contacted the project in 2018 hoping to determine the identity of its Jane Doe.

Dawn Ratliff, the coroner division chief, said her office set up tip lines and worked with media to broadcast stories hoping to identify the woman, but every effort led to a dead end.

"In all the years that we had her, we never received a single inquiry. And at that point I just knew she wasn't local. But I just didn't know where she would be from."

Ratliff said when she eventually heard from Violet Soosay, she asked her to submit a DNA sample. It was processed and compared to DNA they had from the remains. The two were a familial match.

Violet Soosay said that when she got the call with the results, she was flooded with years of emotions, including frustration, anger and elation.

"It was a crazy moment when I found out that she was my aunty."

The family is planning to bury Shirley Ann Soosay in a cemetery at Samson Cree Nation.

Violet Soosay said bikers are supposed to follow her aunt's casket from a funeral home in Wetaskiwin to her final resting place. There will also be a wake with traditional drumming.

Before the body was disinterred in California, the Tule River Tribe performed a ceremony there with prayers and drumming, added Ratliff.

“To be able to restore her name has really been tremendous," she said.

Violet Soosay said she is grateful for the support and work of Ratliff, investigators and those involved with confirming the identity of her aunt's remains.

She said she also has a message for Indigenous families with missing loved ones: "There's always hope. There's always some way to bring them home."