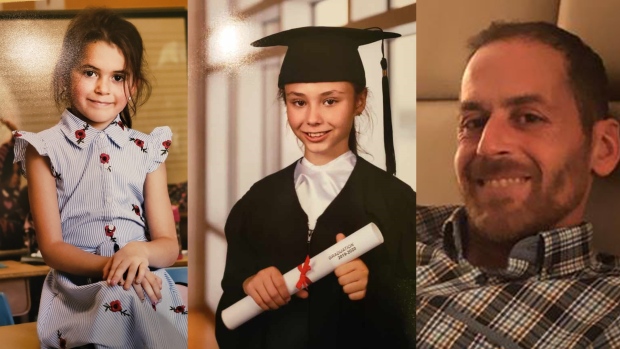 LEVIS, Que. - Quebec provincial police have issued an Amber Alert to locate two young girls and their 44-year-old father who police believe were in a car crash Wednesday night and left the scene on foot.

Police issued the alert at around 3 p.m. Thursday for Norah Carpentier, 11, and Romy Carpentier, 6, from Levis, Que., located south of Quebec City.

Their father, Martin Carpentier, was last seen wearing a grey T-shirt and jeans, and police say he may be wearing glasses. He is listed as being five foot ten and weighing 130 pounds.

Provincial police spokeswoman Anik Lamirande said Thursday the three people went missing Wednesday night. She said emergency workers were called to the scene of a car crash on a highway near St-Apollinaire, Que., a suburb of Quebec City.

The car was heading east and for unknown reasons, skidded into the median, flipped over and landed on the shoulder of the westbound portion of the highway, Lamirande said in an interview.

But when emergency workers arrived at the scene, no one was in the car, she said. The subsequent police investigation led officers to launch the Amber Alert Thursday afternoon, Lamirande said.

She said signs point to the three leaving the scene of the crash on foot.

Police are asking anyone with information on the three people to call 911.

This report by The Canadian Press was first published July 9, 2020.