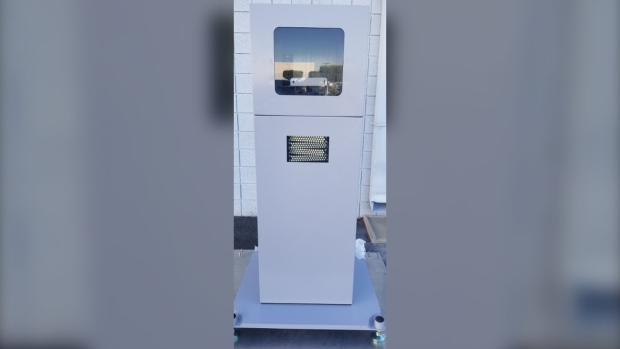 A photo radar speed camera was stolen from a Parkdale neighbourhood in June. (Toronto Police Service)

According to investigators, the city-owned camera was installed near Jameson Avenue and Queen Street and was taken sometime between June 10 and June 12.

The device weighs about 800 pounds and typically requires a hydraulic lift to move, police said.

Anyone with information is being asked to contact investigators or reach out to Crime Stoppers anonymously.

That means that someone going 49 kilometres per hour over the speed limit would be automatically sent a ticket for $588 plus another $130 for a victim surcharge and court costs.

Starting July 6, the City’s 50 Automated Speed Enforcement (ASE) cameras will start ticketing drivers who are caught travelling in excess of the posted speed limit. ASE is one of the many tools in our #VisionZero toolbox intended to reduce speeding in our city and save lives. pic.twitter.com/BveMRpTSUH