'An economic tidal wave for a lot of businesses:' Brampton mayor wants indoor dining permitted in Peel after initial 28-day period is up 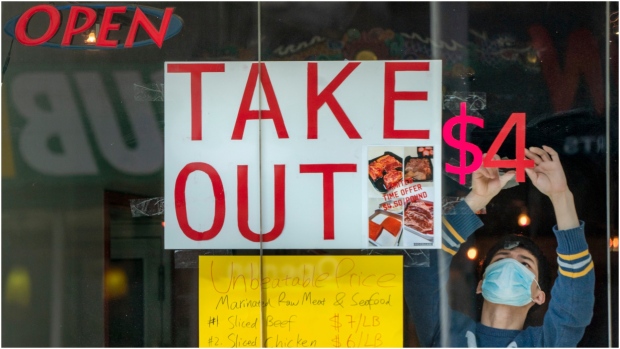 A man tapes signs in a restaurant window in Toronto on Sunday March 22, 2020. THE CANADIAN PRESS/Frank Gunn

Brampton Mayor Patrick Brown says that he is hopeful that the Ford government reconsiders its decision to order the suspension of indoor dining at bars and restaurants in Peel Region once the initial 28-day period is over next month, telling reporters at his weekly briefing that it is important to remember that COVID-19 isn’t “just a health pandemic” but is a “economic tidal wave for a lot of businesses” as well.

Back on Oct. 10 the province moved Toronto, Peel and Ottawa into a modified version of Stage 2 for a minimum of 28 days, forcing bars and restaurants to suspend indoor dining and other businesses, like casinos, gyms and movie theatres, to close entirely.

Speaking with reporters on Wednesday, Brown said that he believes the province took the action in Peel in order to prevent Toronto residents from seeking out bars and restaurants in the region.

Brown, however, said that the bar and restaurant industry is different in Peel than it is in Toronto, where there is more of a “nightlife.”

He said that is supported by the fact that public health officials have yet to find any examples of “forward transmission” in bars and restaurants in Peel Region.

“While there is the Entertainment District in Toronto where many people socialize in loud environments and there can be close contact we just don’t have that same picture in Brampton and Mississauga. So I am hopeful this can be revisited after the 28-day period is over,” he said.

Over a one-week period last month, about 44 per cent of COVID-19 outbreaks in Toronto were tied to bars and restaurants, prompting Medical Officer of Health Dr. Eileen de Villa to plea with the province to impose tougher restrictions, something they did one week after she first asked.

But in Peel Region public health officials say that they have been unable to find a link between rising case counts and bars and restaurants.

“If we were hearing stuff, if we were seeing a massive exposure or outbreak in a restaurant I would point to that but as I have said we have a very different community,” Peel Region’s Medical Officer of Health Dr. Lawrence Loh said during Wednesday’s briefing. “If you look at our restaurants a lot of them don’t even do sit-down dining. We do have certain districts and sectors that do but many of them are small places in a strip mall that are typically counter service or takeout anyway. So I don’t think it is beyond the realm of possibility that we are not seeing the same picture as in other cities where dining and out and sitting down for a meal or going from bar to bar or restaurant to restaurant is a common part of the urban lifestyle.”

Brown said that he has expressed his concerns about the suspension of indoor dining at bars and restaurants in Peel to Premier Doug Ford and is optimistic that “province sees a way in which we can have these restaurants open after this 28-day period.

He said that the sentiment is shared by other mayors in the region, including Mississauga’s Bonnie Crombie.

“We have to remember this isn’t just a health pandemic, it is an economic tidal wave for a lot of businesses,” he said. “They have pored their hearts and souls into their small businesses and it is tough. I think as these decisions are made with we have to be cognizant of that.”