Another suspect in custody after violent abduction downtown: police 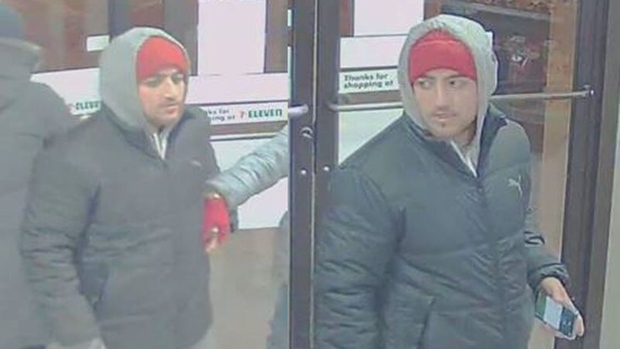 Adisoon Admoon, 20, is shown in these surveillance camera images. Admoon is one of three outstanding suspects sought in connection with a violent abduction on Nov. 16. (Toronto Police Service)

Toronto police say another suspect is in custody after a violent abduction and robbery in the city’s downtown core last month.

Investigators say a 21-year-old man was walking in the area of St. George Street and Willcocks Street on the night of Nov. 16 when four individuals approached him from behind.

According to police, one of the suspects was carrying a conducted energy weapon.

The suspects, police allege, choked and robbed the victim before taking him to a nearby bank machine, where they forced him to withdraw cash.

From there, police say, the victim was taken to a motel in the city’s east end and held there until he raised his credit limit.

Police say the suspects released him after emptying his bank account.

Daeshawn Grant, 18, of Toronto, Kaelin Sankar, 21, of Mississauga, and Tanika Galloway, 21, of Toronto, were later arrested in connection with the robbery and are facing a combined 22 charges.

Arrest warrants were also issued for three others who police allege were also involved in the incident.

On Wednesday, investigators confirmed that one of the outstanding suspects, 20-year-old Adisoon Admoon, was arrested at a home in Toronto on Tuesday.

He has been charged with kidnapping for ransom or service, forcible confinement, robbery with violence, assault by choking, and five counts of using a credit card obtained by crime.

Arthur McLean, 19, of Toronto, and a sixth suspect, who has not been identified, have not yet been apprehended.

Police say the suspects are considered “armed and violent” and are asking anyone who spots them to call 911 immediately.