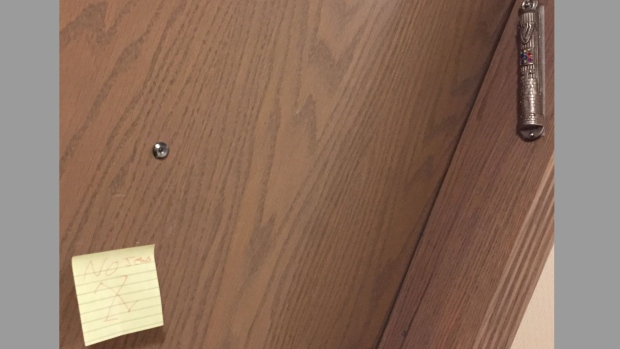 TORONTO -- Notes with anti-Semitic messages that were left on doors at a north Toronto condominium are being investigating as a hate crime, police said Tuesday.

And they said the mezuzah -- a Jewish religious symbol -- was removed from several doors.

Local television footage from the building on Monday showed at least one small note bearing the phrase "no Jews" above a drawing of a swastika.

The incident is being investigated as a "hate bias crime," police said in a release, requesting anyone with information to contact investigators.

"There is no place for anti-Semitism -- or any other form of hatred -- in Canada," Sara Lefton, Toronto vice president of the Centre for Israel and Jewish Affairs, said Tuesday in an email.

"CIJA thanks the Toronto Police Service for its quick reaction to this disturbing display of hatred, and, given the seriousness and severity of the incident, for treating it as a hate bias crime which is clearly warranted," Lefton said.

In a statement Monday afternoon, Mayor John Tory said Jewish residents should not have to face hatred at their doorsteps.

"Anti-Semitism has no place in Toronto," Tory said. "These acts, and the people who carry them out, do not represent Toronto or Torontonians."

The UJA Federation of Greater Toronto said it was "alarmed" by the incident.

"Like all acts of hatred and intolerance, these deliberate acts of hostility toward the Jewish community are completely unacceptable," group president Adam Minsky said Monday in a news release.