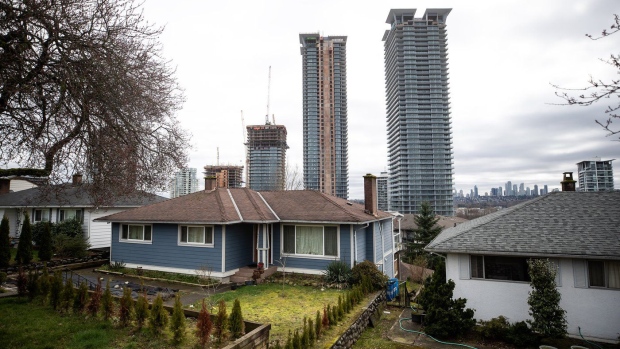 Condo towers under construction rise up a few blocks away from houses, in Burnaby, B.C., on Wednesday, March 2, 2022. The latest census data shows single-detached homes are still the most plentiful type of housing in Canada, but apartments and row houses are catching up. THE CANADIAN PRESS/Darryl Dyck

TORONTO - Single-detached houses are still the most plentiful type of housing in Canada, but apartments and row houses are slowly catching up, the latest census data reveals.

The figures released by Statistics Canada on Wednesday show the country's 7.8 million single-detached homes made up about 53 per cent of Canada's housing supply in 2021, down from roughly 54 per cent during the 2016 census.

The data agency found the growth of single-detached homes was outpaced by apartments in both low-rises and highrises along with row houses.

Housing experts attributed much of the shift to consumer preferences, zoning regulations and the lack of space in several regions, especially popular downtown cores already known for their high density.

“The problem is land. You cannot grow it,” said Murtaza Haider, a professor of data science and real estate management at Toronto Metropolitan University.

Housing prices, which are soaring beyond many people's budgets, are also fuelling the demand for apartments.

The national average home price was $796,000 in March, up 11.2 per cent from the same month last year, the Canadian Real Estate Association said. Excluding the heated Greater Toronto and Vancouver Areas from the calculation cuts $163,000 from the national average price.

The “overwhelming majority” of people would still prefer a detached home, but Haider said many rethink their housing choices, when “reality kicks in.”

“People don't have that kind of income to buy million-plus-dollar homes, especially if you're young and you're looking for the starter home because you're a first-time homebuyer,” he said.

“They end up gravitating toward these highrise homes, apartments or condominiums.”

As these patterns have unfolded, Statistics Canada counted 1.5 million apartments with more than five storeys across the country last year. They made up 10.7 per cent of the country's housing stock last year, up from 9.9 per cent in 2016.

Row houses experienced a slight uptick, rising from 6.3 per cent of the housing supply in 2016 to 6.5 per cent last year.

Much of the growth is concentrated in and around the downtowns of large urban centres, where millennials, who are most likely to be first-time homebuyers, account for the largest share of the population.

They make up more than one-third of the downtown populations of large urban centres, while baby boomers comprise just one in five people living downtown, despite being the country's largest generation.

“Downtowns tended to grow faster in larger urban centres, so what types of dwellings can you build downtown, where space is a premium? You need the types of dwellings that are going to allow for densification, for more people to flow into,” Statistics Canada senior analyst Jeff Randle said.

A tranche of data the agency released in February showed more than 1.2 million people, or 3.5 per cent of Canadians, lived in the downtown portion of one of the country's 41 large urban centres in the spring of 2021.

Those downtowns saw their populations grow by 10.9 per cent between 2016 and 2021, a much faster rate than the 4.6 per cent growth they experienced during the previous census period, which covered 2011 to 2016.

Cody Skrzypkowski, a senior partner at North Group Real Estate in Toronto, expects these areas and their apartment buildings to continue to surge as the country recovers from the COVID-19 pandemic, which pushed many to consider rural and suburban real estate.

He saw Ontario's York, Halton and Durham regions explode with buyers at the onset of the pandemic, but the trend is reversing now.

“We're going to start to see a resurgence in the more urban communities, where typically you find the highrises and the multi-dwelling properties,” he said.

“Then, as we start to go back to whatever version of normal we may see, the demand for more urban properties will continue to grow, and so will the condo market and more densely populated areas.”