The Toronto Argonauts returned home with the biggest prize in Canadian football Monday evening after their dramatic victory over the Winnipeg Blue Bombers in the 109th Grey Cup game in Regina on Sunday.

The team touched down at Pearson International Airport just before 6 p.m.

The Grey Cup was carried off the plane by head coach Ryan Dinwiddie and linebacker Henoc Muamba, who was named both the most valuable player and most valuable Canadian of the Grey Cup game.

Second player in history to earn both honours! https://t.co/rWU8g3HdqC

The Argos went into Sunday’s game as underdogs against the two-time defending champion Blue Bombers but the game was close in the dying minutes of the fourth quarter.

Toronto led 24-23 when Muamba intercepted Blue Bombers quarterback Zach Collaros to put the Argos at the Winnipeg 43-yard line with 3:20 to play. But Winnipeg's Nick Hallett blocked a 37-yard field goal attempt to put the Bombers at their 29-yard line with two minutes remaining.

Then, with less than a minute left to play, Canadian Robbie Smith blocked Winnipeg’s 47-yard field goal attempt which would have given the Blue Bombers the lead. Toronto got the ball at its 14-yard line with 43 seconds remaining and was able to run out the clock for the stunning victory.

“What a crazy turn of events, right,” said backup quarterback Chad Kelly, who replaced Argos starter McLeod Bethel-Thompson after he dislocated his thumb early in the fourth quarter, when Toronto was trailing 23-17.

“I mean at first we’re like: ‘oh we're about to go up four’ and then the block and then all of a sudden they're going down to kick for the win. And then there's another block and you're like: ‘man, this is unreal.’ But this is exactly the way God wrote it. And we're super fortunate and super blessed to be on the winning side.” 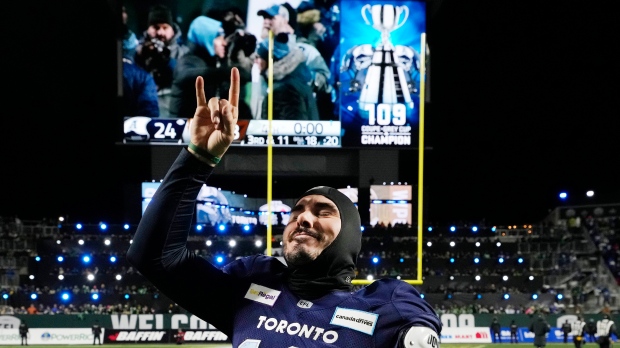 Muamba, the first-overall pick in the 2011 CFL draft, said this year’s Argos squad is “by far the best team” that he and many of his teammates have ever been a part of.

The 33-year-old linebacker who grew up in Mississauga also said he wouldn’t be the man he is today if not for the game of football and the opportunities it’s given him.

“I think a lot of people miss out on the gems that come from the game of football and I’m living proof of that,” Muamba said.

“I don’t think I should be where I am today. I’m a young boy that was born in Africa and my parents decided to immigrate to Canada… the man you see today, I wouldn’t be the same if I didn’t play the game of football.”

Dinwiddie says he wants his team to enjoy the victory, but he’s already got his sights set on winning another Grey Cup next season.

“We’re going to build a stable organization and that’s what I was hired to do. I take a lot of pride in that. So as soon as that game - a crazy game - ended, I was like: ‘let’s go get number two’ and that’s where my focus is right now,” he said.

Argos fans can celebrate with the team on Thursday at Maple Leaf Square outside Scotiabank Arena, where a championship rally is being held at 11 a.m.

With the Toronto Argonauts winning the franchise’s 18th Grey Cup on Sunday, the team announced plans for a public celebration with fans from 11 a.m. to 1 p.m. on Thursday at Maple Leaf Square.

Coach Ryan Dinwiddie and linebacker Henoc Muamba of the Toronto Argonauts hold the Grey Cup as they arrive at Toronto Pearson International Airport in Mississauga, Ont., Monday, Nov. 21, 2022. The Argonauts defeated the Winnipeg Blue Bombers on Sunday to win the cup. THE CANADIAN PRESS/Arlyn McAdorey