Arrest made in fatal shooting outside Scarborough apartment building 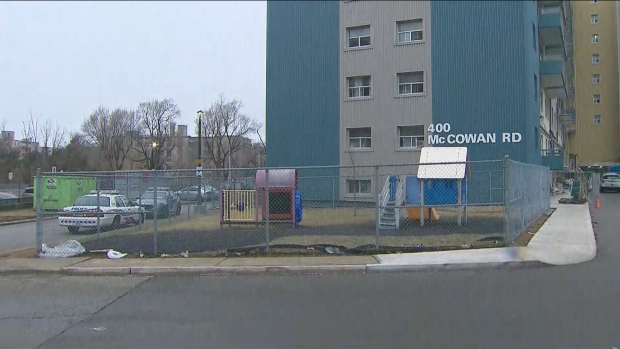 Toronto police say one person is dead after a shooting at an apartment building in Scarborough’s Eglinton East neighbourhood on Dec. 29, 2019.

Police have arrested a 21-year-old man in connection with a fatal shooting outside a Scarborough apartment building last month.

Koshin Yusuf, 26, was gunned down outside a building on McCowan Road near Eglinton Avenue at around 3 a.m. on Dec. 19.

At the time, police alleged that two suspects approached Yusuf, produced firearms and then shot him multiple times before fleeing the area.

In a news release issued on Wednesday, police said that 21-year-old Oday Bazuhair was arrested following the execution of multiple search warrants earlier in the day.

One firearm was seized during the execution of the search warrants, police say.

Bazuhair has since been charged with first-degree murder and is expected to appear in court today.

It is not clear whether any additional suspects are being sought.