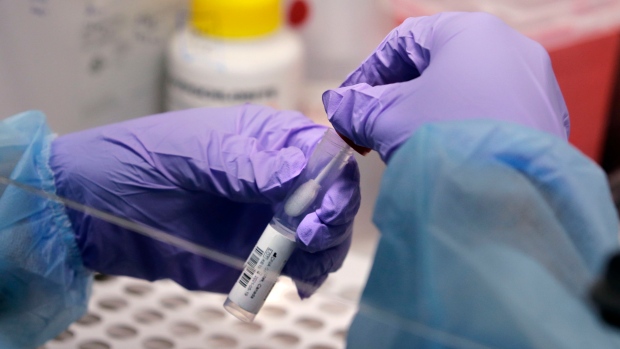 The Omicron variant continued to cause record-breaking COVID-19 case numbers in several provinces Thursday, but a new study from Ontario suggested those infected with the variant are significantly less likely to face hospitalization or death compared to those with Delta.

In the study, Public Health Ontario compared Omicron cases with symptoms that emerged between Nov. 22 and Dec. 17 with Delta cases and found that, after adjusting for vaccination status and region, the risk of hospitalization or death was 54 per cent lower with Omicron.

The agency said Omicron appears to be the first dominant variant to show a decline in severity but warned that, due to its higher transmissibility, “the absolute number of hospitalizations and impact on the health-care system is likely to be significant, despite possible reduced severity.”

Provinces have seen surging case counts as a result of Omicron. Ontario and Quebec both hit records for new infections Thursday. Ontario reported 13,807 new COVID-19 cases and Quebec had 14,188.

The research institute that reports to the Quebec government said its modelling predicts “significant growth in new hospitalizations and the consequent occupancy of regular and intensive care beds over the next three weeks.”

The Public Health Agency of Canada said the latest provincial and territorial data show that an average of 1,892 people with COVID-19 were being treated in Canadian hospitals each day this week, which is 23 per cent higher than last week.

“Keeping infection rates down remains key to avoiding renewed increases in severe illness trends over the coming weeks and months, as well as to ease the longer-term strain on the health system, particularly in heavily impacted areas,” the federal agency said in a statement Thursday.

In Ontario, the provincial chief medical officer of health said publicly funded PCR testing will be available only for high-risk individuals who are symptomatic or are at risk of severe illness.

“We must preserve those resources for those that need it the most,” Dr. Kieran Moore said of the PCR testing.

He said the isolation period for those with COVID-19 will drop to five days from 10 days following the onset of symptoms for those who are vaccinated as well as children under 12 years old. Household contacts will also have to isolatefromthose who have tested positive.

In Atlantic Canada, Prince Edward Island reported a single-day record of 169 new COVID-19 cases. Chief public health officer Dr. Heather Morrison said most of the cases involve mild to moderate symptoms that she credited to the high level of vaccination in the province.

COVID-19 has also hit Labrador's north coast for the first time, with 10 presumptive positive cases in the fly-in community of Nain, a town of about 1,100 people. Newfoundland and Labrador also reported 349 infections, setting another record for daily case numbers.

Nova Scotia said it will open eligibility for booster shots to those aged 30 and up beginning Monday.

Meanwhile, WestJet Airlines announced it is cutting 15 per cent of flights through the end of January to deal with staffing shortages due to Omicron. The Calgary-based airline said it has had a 35 per cent increase in active cases among staff in recent days, with 181 WestJet employees currently affected by COVID-19.

The rising case counts due to Omicron have also affected back-to-school plans. Classes in Ontario were to resume Monday in much of the province, but the holiday break will now end on Wednesday. The province said the extra days will give schools time to prepare for several changes, including providing N95 masks to staff in schools and daycares, and deploying 3,000 HEPA filter units in addition to the 70,000 it has already rolled out.

British Columbia has said it will bring back students in January in a phased approach, with staff and students whose parents are health workers, as well as those who need extra support, returning to class on Jan. 3 or 4. All other students will go back to school on Jan. 10.

Manitoba reported higher rates of COVID-19 among health-care workers with 418 of them testing positive for COVID-19 last week, which was about seven times the number of cases from the previous week. The province also said there was a 32 per cent increase in hospitalizations, with a “sizable number” of young people receiving care.

The federal government announced more than $8 million in funding for Manitoba to help people who have COVID-19 to access safe isolation sites.

Kevin Lamoureux, the MP for Winnipeg North, told a news conference Thursday that the funding would help create sites in Winnipeg, Brandon, The Pas, and Thompson.

“I think it's important to acknowledge that for some Canadians physical distancing is not that simple,” he said.

Manitoba Health Minister Audrey Gordon said the sites would provide a range of services including meals, wellness checks and, if needed, health-care supports.

In Saskatchewan, Premier Scott Moe said mass testing and booster shots have made him confident that the government can limit the severity of the pandemic without introducing new health restrictions. He said the province is seeing higher case counts, but decreasing hospitalizations.

Moe said the government is changing the way it tracks infections because the symptoms of Omicron are much more mild. He said his government will now focus on hospitalization numbers and keep pushing for vaccinations and regular testing.

Also in Quebec, a COVID-19 outbreak at a federal prison has seen 15 staff members and four inmates test positive for the novel coronavirus. Correctional Service Canada revealed the infections at the medium-security La Macaza Institution in a statement Thursday.

Last week, Correctional Service Canada reported 17 active cases among inmates, though it has since announced outbreaks among inmates at a Nova Scotia women's prison and a penitentiary in Ontario.

- With files from Paola Loriggio in Toronto, Lee Berthiaume and Erika Ibrahim in Ottawa, Virginie Ann in Montreal, Fakiha Baig in Edmonton and Alanna Smith in Calgary

This report by The Canadian Press was first published Dec. 30, 2021.